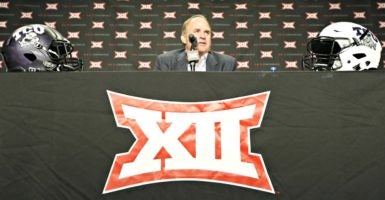 The Big 12 will be making a big mistake if the college sports conference cowers at the latest assault on the First Amendment and freedom of religion by lesbian, gay, bisexual, and transgender activists.

Ten teams currently make up the Big 12 conference, but discussions are underway about whether to add two to four schools, and if so, which ones.

Normally, the main considerations when picking new universities to join would be: What is their fan base? How large is their stadium? How strong are their ticket sales? And will they increase the conference’s opportunities to get more games nationally televised?

In other words, what do potential schools bring to the table that will make a conference more competitive and more profitable?

Considering the above, of all the schools thought to be in contention to join the Big 12, Brigham Young University should be a top contender. It most certainly has a larger national following than several other teams said to be in the running, such as Cincinnati, Northern Illinois, or Memphis.

But there is just one problem. Brigham Young, a university run by the Church of Jesus Christ of Latter-day Saints, has an honor code that, shocker of shockers, aligns with its religious beliefs.

One of those Mormon beliefs is that homosexual behavior is incompatible with the church’s religious tenets. That has the LGBT bully community all aflutter and demanding that the Big 12 not allow BYU to enter the conference because, in their view, the university has an “express policy of discriminating against same-sex couples and LGBTQ students.”

The honor code forbids students and faculty from activities that those outside the Mormon faith may find out of step with today’s secular, mainstream culture.

In addition to not using alcohol and tobacco, adherents also agree not to drink coffee or tea (as is directed in the church’s doctrine and covenants), not to gamble, and not to wear clothing that is form-fitting (that goes for women and men).

Also, adherents agree to follow a “strict commitment to the law of chastity.” In other words, no premarital sex for anybody. The code goes on to specifically address homosexual behavior, stating that same-sex attraction is not a violation of the honor code, but acting on it is:

So apparently, the reason everyone should be marching in the streets is because heterosexual couples on the BYU campus can hold hands, but homosexual couples can’t.

And please, for all those who are going to write me about how this is just like the 1950s, when some restaurants and schools banned blacks, check the history first.

Such businesses and institutions were wrong to do so and had no protection under the First Amendment or any other part of the Constitution for their actions. Such actions were based on prejudice, not deeply held religious beliefs.

Additionally, homosexual students and teachers are not banned from attending BYU or serving on the faculty. They simply, like everyone else, must abide by the university’s code of conduct.

If you attend a football game at BYU, you will not be able to buy a beer or a cup of coffee at concession stands—even if you are a fan of the visiting team who has not agreed to the honor code. And you will not be allowed to bring alcohol to your tailgate party on campus.

My guess is, if you tried to start up a poker game, they might ask you to cease and desist as well. But so what? It’s their campus and they have every right to uphold their religious beliefs there.

I don’t know of any incident when BYU (or any other religious university, for that matter) has refused to host a visiting team in its stadium or arena because that team has a different code of conduct—and I’m sure it’s the majority of schools they play. It would seem those yelling charges of discrimination could take a lesson from BYU’s playbook.

Whether or not the Big 12 decides Brigham Young University is the right fit for the conference is up to them. But taking BYU out of contention specifically because of an honor code based on religious beliefs would be full-blown discrimination against people of the Mormon faith.

I’d like to see them try that against Notre Dame.