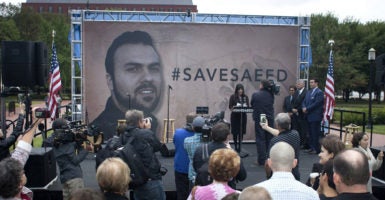 Before Pastor Saeed Abedini was released from prison by Iran in January, his wife, Naghmeh, spoke at a vigil for him. (Photo: Toby Jorrin/MCT/Newscom)

The fallout from the revelation that the Obama administration paid $400 million in cash to Iran continued on Thursday when one of the four American hostages freed on the same day described how his trip home was delayed under murky circumstances.

Pastor Saeed Abedini, an Iranian-American Christian pastor who was imprisoned in Iran, told Fox Business Network in an interview that he was taken out of his prison cell and brought to an airport in Tehran. There, a plane was waiting for him and other freed American prisoners, Abedini said. But before they could be flown home, Abedini said he and the other prisoners had to wait several hours for another plane to land first.

The Wall Street Journal reported earlier this week that a $400 million cash payment to settle a longstanding legal claim was delivered to Iran on palettes aboard an unmarked plane on the same day in January when Abedini and the other hostages were freed. The nuclear deal with Iran was also implemented that day.

Critics quickly charged that the transfer of cash to Iran—money it was already owed—amounted to a “ransom” payment.

When Fox Business Network’s Trish Regan suggested to Abedini that the plane he said he was waiting for could be the plane that delivered the $400 million to Iran, the pastor said he wasn’t told the details of the hold-up.

“They didn’t talk about money,” Abedini said. “They just told me about the plane. The reason they said you are here in the airport is because we are waiting for another plane. After that, they never told anything to me and I didn’t see anything.”

Abedini said he and the other freed hostages ended up spending the night at the airport waiting for the second plane.

Under those circumstances, Regan asked Abedini if he thought the U.S. government paid a ransom for his freedom.

“I don’t believe they will use this money for just building an orphanage, but I prefer that the politicians answer this question,” Abedini said.

At a press conference Wednesday, a deputy spokesman for the State Department would not clarify the timeline for reporters.

“As to the timing, I simply don’t—I can’t answer conclusively that these hostage—or these detainees, Americans, were on a plane before that money arrived,” said the spokesperson, Mark C. Toner.

President Barack Obama, meanwhile, has tried to settle criticism of the cash payment.

Speaking to reporters at the Pentagon on Thursday, Obama said that the administration publicly announced on the day of the hostage release, and implementation of the nuclear deal, that it had also settled a $1.7 billion financial dispute with Iran over a failed arms deal dating back to the Iranian revolution.

The administration did not mention at the time that the first installment of that payment—the $400 million in cash—was paid in stacks of foreign currency that were flown to Iran on the same day the prisoners were released.

“This wasn’t some nefarious deal,” Obama said. “It wasn’t a secret. We were completely open about it. The only bit of news is that we paid cash.”

“The reason is because we couldn’t send them a check and we couldn’t wire the money. We don’t have a banking relationship with Iran which is part of the pressure we applied on them,” Obama added, referencing American sanctions that prevent dollars from being used in a transaction with Iran.

Sen. Chuck Grassley, R-Iowa, the chairman of the Senate Judiciary Committee, sent a letter to Attorney General Loretta Lynch on Friday asking about the Justice Department’s involvement in the cash payment.

The Wall Street Journal reported on Thursday that senior Justice Department officials had objected to the cash payment, worried it would be seen as a ransom.

They were overruled by the State Department, the newspaper said.

“There are serious questions about this administration’s policies regarding paying ransoms to terrorists and state-sponsors of terrorism,” Grassley wrote in the letter.