How Putin Hoodwinked the Political Right 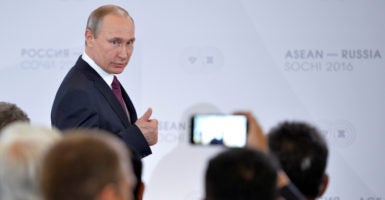 Russia's Vladimir Putin at a meeting with the Association of Southeast Asian Nations earlier this year. (Photo: Pool/Reuters /Newscom)

It’s easy to see why Vladimir Putin has emerged as the lodestar of certain elements of the political right across the West. Russia’s president poses as the champion of nationalism vs. rampant transnationalism, of Christianity vs. secularism, and of European identity in general.

These are battles that set conservatives’ teeth on edge. The political left in the West has for decades been relentless in its support for global governance, for limiting Christianity’s moral imprint on policymaking, and for stigmatizing the West in general.

But conservatives can certainly find a better champion for these causes than the former KGB agent who publicly pines for the supranational Soviet Union, presides over a society replete with social ills, and does not miss an opportunity to promote Russia not as a Western power but as an Asian one.

It is an astonishing trifecta that Putin has worked very hard to accomplish.

On transnationalism, for example, Putin has posed as an enthusiastic supporter of the United Kingdom leaving that most dysfunctional of supranational organizations, the European Union. “No one likes to feed and subsidize weaker countries and be a caretaker all the time,” Interfax quoted Putin as saying.

On Christianity, when Metropolitan Hilarion of the Russian Orthodox Church pleaded with Putin to become the defender of the Christian faith around the world, Putin reassured him that “you needn’t have any doubt that that’s the way it will be,” according to Russia’s Interfax.

With religion, Putin is relying on more than his own propaganda. Since the 1500s, Russia has put forward the vague notion that it is the “Third Rome”—the rightful successor to Rome and Byzantium as the center of Christianity. The claim was supposedly first made by the monk Filofei of the Pskov-Eliazarov monastery in two epistles which, unsurprisingly for Russia, have gone missing.

Fast forward five centuries, and Putin’s vow to Hilarion was enthusiastically endorsed by Washington evangelical outlet Christian Post, which explained that “Putin has long been a supporter of Christianity and Christian values within Russia.”

When visiting Hungary’s Prime Minister Victor Orban this year, Putin praised his anti-immigrant positions by stating that what Orban was doing was “to defend European identity.” That, he said according to a translation by RT, “is likable to us.”

Small wonder perhaps that Europe’s right-wing leaders are smitten with Putin, seeing in him the leader who will defend Europe from the spiritual decadence they accuse the United States of spreading. The leader of France’s anti-immigrant National Front, Marine Le Pen, recently said of Putin that “we are defending common values … the Christian heritage of European civilization.”

Even Putin’s main protégé in the Mideast, the Syrian dictator Bashar Assad, says piously that “Vladimir Putin is the sole defender of Christian civilization one can rely on.”

At home, Putin uses this international support to show his conservative bona fides. “We know that there are more and more people in the world who support our position on defending traditional values that have made up the spiritual and moral foundation of civilization in every nation for thousands of years: the values of traditional families, real human life, including religious life, not just material existence but also spirituality,” he told the federal assembly in 2013. “Of course, this is a conservative position.”

When it suits him.

As the Tory policy adviser Peter Franklin puts it, “If Putin wants to be seen as a defender of ‘traditional values’ and ‘spirituality,’ then why the diplomatic coziness with the likes of China, Cuba, and North Korea? There’s nothing spiritual about a communist dictatorship.” Or the butcher Assad, for that matter.

“The whole thing is a joke,” said David Kramer, a Russian expert who served as former assistant secretary of state for democracy, human rights and labor. “The only thing that matters to Putin is staying in power.”

Putin in fact seems more of the school of Kremlin leaders who feel more the gravitational pull of the other half of Russia’s identity—the Asian part, like Joe Stalin telling a Japanese diplomat once, “Russia is an Asiatic country, and I am myself an Asiatic.”

Thus Putin has pursued a “Eurasian Union” that brings together European former Soviet republics such as Belarus and Armenia with non-European ones such as Kazakstan, Kyrgyzstan, and Tajikistan. It’s been envisioned as a customs union, but Putin has more grandiose plans. “We suggest a powerful supranational association capable of becoming one of the poles in the modern world,” he wrote in 2011.

The union has foundered, but that has only made Putin reach further east. Last month he actually proposed to Beijing to expand the Eurasian Union by including China, India, Iran, and Pakistan.

Even the Putin-controlled RBTH observed five years ago that “he seems more comfortable at Shanghai Cooperation Organization and BRICS meetings than he is at the G8. ‘The West treats us like we just came down from the trees,’ Putin once remarked.”

At home, Putin presides over a nation that is hardly puritanical. Russia has the world’s highest divorce rate, the highest rate of injecting drug users, and one of the highest rates of alcoholism in Europe, while abortions last year reached almost a million. Unsurprisingly, Russia population has declined under Putin.

Observers point out that the support Putin receives from some quarters may have less to do with policy than with the fact he finances many of these parties. In France, Le Pen’s Front National has received at least 40 million euros from Russian-controlled banks. According to a paper, far-right parties from Hungary to Bulgaria to Austria all receive funding from Putin-controlled entities.

Equally, it comes in handy that Russian disinformation campaigns have succeeded in spreading Moscow’s propaganda throughout the West, through such outlets as RT.