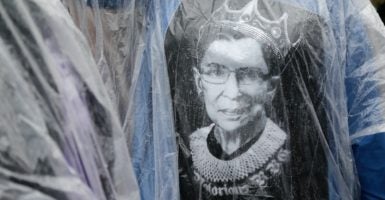 Perhaps due to her outspoken liberal views, Ruth Bader Ginsburg has her share of fans, including this person wearing a T-shirt of her. (Photo: Andrew Gombert/EPA/Newscom)

It’s summertime in Washington, which means the Supreme Court justices jetted out of town as the ink dried on their final decisions of the term.

Many justices observe summer traditions—Anthony Kennedy teaches classes in Austria, the late Antonin Scalia would travel out west to teach a continuing legal education class for The Federalist Society, and Clarence Thomas and his wife Ginni take to the open road in their RV.

Ruth Bader Ginsburg seems to have developed a tradition of her own: a gabfest with the media.

Last summer, she shed light on how she would have written a more expansive opinion in Obergefell v. Hodges than Kennedy’s and that she and Justice Stephen Breyer were ready to find the death penalty unconstitutional. The summer before, she gave an interview criticizing her male colleagues for having a “blind spot” on women’s issues following the ruling in favor of Hobby Lobby.

This summer she turned her focus to the upcoming presidential election and presumptive Republican presidential nominee, Donald Trump, and her wish list of cases to overturn.

It damages the reputation of the court and the idea that it is impartial and nonpartisan when a justice makes blatantly political statements.

In an interview with New York Times Supreme Court correspondent Adam Liptak this week, Ginsburg commented that she “can’t imagine” a Trump presidency and joked that if he is elected, it will be “time for [her] to move to New Zealand.”

“For the country, it could be four years. For the court, it could be—I don’t even want to contemplate that,” she continued. She pointed out that she, Kennedy, and Breyer are not as young as they once were, which highlights the fact that the next president will appoint one—and possibly more—justices.

Later in the week, she doubled down on her comments about Trump in an interview with CNN legal analyst Joan Biskupic: “He is a faker. He has no consistency about him. He says whatever comes into his head at the moment. He really has an ego.”

There are no hard-and-fast rules precluding the justices from making comments about politics. Some commentators have come to Ginsburg’s defense—maintaining that she’s simply exercising her free speech rights.

Generally speaking, however, it damages the reputation of the court and the idea that it is impartial and nonpartisan when a justice makes such blatantly political statements.

The Code of Conduct for United States Judges prohibits judges from “publicly endorse or oppose a candidate for public office” or “engag[ing] in any other political activity.” Though they often consult the code for guidance (as Chief Justice John Roberts explained in a year-end report to Congress), they are not bound by the code and there is no recourse if they choose to ignore the code’s commands.

Ginsburg also discussed the nomination of Merrick Garland to fill the vacancy left by Scalia’s sudden death in February. Parroting Democrats’ talking points, she called out senators for their failure to “do their job” and confirm Garland. Reducing the court to a political entity that votes along party lines, she commented that the confirmation of Garland or another Democrat nominee “means that I’ll be among five more often than among four.”

This gets the proper role of judges backwards— they must strive to faithfully apply the Constitution and laws by relying on their original public meaning, rather than according to what the Democratic or Republican Party platform says.

Ever the chatterbox, Ginsburg had still more to discuss. Turning next to cases she hopes the court will overturn, she identified Citizens United v. Federal Election Commission (lifting a federal ban on independent political expenditures made by corporations, unions, and associations) and District of Columbia v. Heller (recognizing an individual right to keep a gun in the home for self-defense).

This isn’t the first time Ginsburg has publicly commented on matters that could come before the court. While the same-sex marriage case, Obergefell v. Hodges, was pending before the court, she insinuated that America was ready for gay marriage.

Before the recent Texas abortion case, she had already spoken out against the very regulations she would vote to strike down, suggesting that state legislatures could not be trusted “in view of the restrictions” they were imposing and that Texas’ regulations “would put most clinics out of business.” This prompted calls for her recusal from the case.

The justices need not heed every suggestion that they recuse themselves in a given case, but when it is clear they cannot review an issue impartially, they should recuse themselves. Indeed, Scalia once recused himself from a case involving the pledge of allegiance after he gave a speech referencing an appellate court’s ruling that subsequently came before the court. Elena Kagan has recused herself from a number of cases based on her familiarity and involvement with them from her time as U.S. solicitor general.

Ginsburg released a statement Thursday morning noting that she regrets her remarks about Trump.

On reflection, my recent remarks in response to press inquiries were ill-advised and I regret making them … Judges should avoid commenting on a candidate for public office. In the future I will be more circumspect.

But the damage is already done.

Any justice who expresses her views on political issues and specific cases erodes public confidence in her ability to act as an impartial arbiter. Protecting the integrity of the court should be a higher priority for all the justices than grabbing headlines or expressing their opinions on matters that ultimately may come before the court.