Armed Drones ‘Could Have Made a Difference’ at Benghazi, Lawmakers Conclude 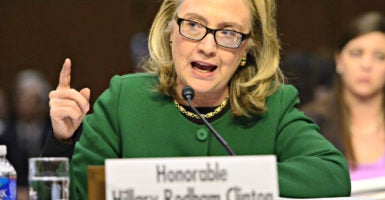 The U.S. military response was perplexingly inadequate Sept. 11, 2012,  the night Americans were attacked by Islamist terrorists in Benghazi, Libya.

That’s one overarching conclusion reached by two leading Republicans on the House Select Committee on Benghazi after an investigation lasting a year and a half.

Armed U.S. drones “could have made a difference,” they say.

“Until now the administration has led us to believe the military did not have assets, men, or machines close enough or ready enough to arrive in Benghazi in time to save lives,” Reps. Jim Jordan, R-Ohio, and Mike Pompeo, R-Kansas, write. “An asset that could have made a difference would have been armed drones. And as the committee learned, it would have been relatively fast and easy to arm a drone.”

>>> Details of the Benghazi committee’s report

Jordan and Pompeo released a 48-page supplement to the committee’s official report, also out today and numbering more than 500 pages.

Jordan said he and Pompeo “felt the need to draw conclusions from facts,” and address motivations behind the Obama administration’s Benghazi-related actions—something he said the committee’s main report stopped short of doing.

Four Americans were killed in the Benghazi attacks: U.S. Ambassador Christopher Stevens and foreign service officer Sean Smith died in the initial assault on the unsecure diplomatic compound. CIA contractors Glen Doherty and Tyrone Woods were killed hours later, when no U.S. military help from outside Libya came to the rescue and terrorists assaulted the nearby CIA annex.

The events, as told by survivors in the annex, were portrayed in this year’s hit movie “13 Hours: The Secret Soldiers of Benghazi,” based on a book they wrote.

The fallout from Benghazi is among the most enduring controversies of the Obama administration.

The tragic events happened eight weeks before the 2012 presidential election. President Barack Obama’s re-election campaign centered, in part, on the notion that his administration had eliminated major terrorist threats.

Almost immediately, when word of the attacks reached Washington, all concerned understood they were acts of terrorism, according to documents and witnesses inside the Obama administration.

Emails and testimony later revealed that then-Secretary of State Hillary Rodham Clinton and other officials privately confirmed the terrorist origins of the attacks with foreign officials and their own family members right away, but told a different story to the public and the victims’ family members.

Even as the assault was underway, Clinton began advancing a false narrative pointing to an anti-Islamic YouTube video rather than Islamist terrorists.

Emails also revealed the Obama administration censored words and phrases such as “Islamic” and “terrorism” from official talking points. This was the first time there was public focus on the administration’s avoidance of such terms, something it has continued to do on many occasions since.

Democrats remain steadfast in their insistence that “administration officials did not make intentionally misleading statements about the attacks, but instead relied on information they were provided at the time under fast-moving circumstances.”

Democrats on the select committee released their own separate report yesterday. Their version concentrated largely on “abuses Republicans engaged in during this investigation.”

Their account of the committee’s work is, in many instances, diametrically opposed to the Republican version. Democrats largely claim the committee simply confirmed what was already known.

They accuse Rep. Trey Gowdy, R-S.C., chairman of the panel, of “conducting this investigation like an overzealous prosecutor desperately trying to land a front-page conviction rather than a neutral judge of facts seeking to improve the security of our diplomatic corps.”

Democrats call the Benghazi committee’s work “one of the longest and most partisan congressional investigations in history.”

In the end, Republicans say the White House “impeded the investigation,” making it impossible to answer all outstanding questions.

The committee ended its work without having spoken to anyone in the White House Situation Room that night. Nor did we receive all email communication between White House staffers concerning the attack, all off limits to Congress according to White House lawyers.

Obama’s whereabouts during the attacks and his precise actions remain unknown and publicly unaccounted for.

White House press secretary Josh Earnest blocked release of White House photos taken that night that could provide insight. And the president did not respond to the committee’s questions.

When the  committee sought to identify and interview the military operator who guided an unmanned military drone flying over the compound while the attacks were underway, a Defense Department official responded: “The [Defense] Department has expended significant resources to locate anyone who might match the description of this person, to no avail.”

However, that claim was proven “completely false,” Republicans said. Eventually, the Department of Defense produced the witness.

As to what military assets might have been available, but were not called upon, the Republicans say the Defense Department refused to fill in those blanks:

The military has failed to provide a clear, specific inventory of every armed aircraft whether manned or unmanned that could have flown to Benghazi during the seven-plus hours from the beginning of the attack to the mortar rounds hitting the CIA annex. Instead, the military has insisted that the committee simply accept the word of senior military officers, some without firsthand knowledge of the events, as an adequate substitute for actual eyewitnesses.

The Defense Department could not have done anything differently on the night of the attacks that would have saved the lives of the four brave Americans killed in Benghazi, and although the military’s global posture prevented it from responding more quickly that night, improvements were made years ago.

Using government documents, Jordan and Pompeo spend many pages in their report contrasting the private and public statements of Obama officials at the time.

For example, Clinton emailed her daughter at 11:23 p.m. the night of the attacks:  “Two of our officers were killed in Benghazi by an Al Queda-like [sic] group[.]”

But Clinton didn’t mention terrorism or the terrorist group al-Qaeda in her public remarks the following morning, when she implied a YouTube video sparked protesters, who then got out of control and attacked the U.S. compound.

And Clinton told Egypt’s prime minister in private: “We know the attack in Libya had nothing to do with the [YouTube] film. It was a planned attack not a protest[;] we believe the group that claimed responsibility for this was affiliated with al Qaeda.”

After Susan Rice, then U.S. ambassador to the United Nations, appeared on Sunday talk shows furthering the false narrative that blamed a spontaneous protest for the attacks, documents show, some State Department officials reacted with shock and disbelief.

One State Department official emailed another: “The horse has left the barn on this, don’t you think? Rice was on FIVE Sunday morning shows yesterday saying this. Tough to walk back.”

Other State Department officials chimed in:

“[State Department spokesman Victoria Nuland] planned on walking it back just a bit, though.”

“I think Rice was off the reservation on this one.”

“Yup. Luckily there’s enough in her language to fudge exactly what she said/meant.”

“Off the reservation on five networks!”

“[White House] very worried about the politics. This was all their doing.”

But instead of correcting Rice’s statements, Republicans say, the State Department may have changed its public statements to match Rice’s claims.

“No one asked about it could explain the change. The change from the truth to a known false statement is troubling,” Republicans say.

Obama considered Rice as a possible successor to Clinton as secretary of state. As controversy over her statements lingered, she withdrew her name. Obama later appointed her as his national security adviser.

Republicans also criticized the fact that dozens of terrorists stormed the U.S. compound in Benghazi that night and many of their images were captured on video cameras. Yet, almost four years later, only one suspect has been indicted and brought to the U.S. to face charges: Ahmed Abu Khatallah.

“The United States does know the identity of many of the attackers,” Jordan and Pompeo say in their report. “Yet, the resources devoted to bring them to justice have proven inadequate.”

Furthermore, the congressmen note, “the administration has chosen for reasons it refused to provide Congress not to seek the death penalty in this case.”

Democrats on the committee argue:

Decades in the future, historians will look back on this investigation as a case study in how not to conduct a credible investigation. They will showcase the proliferation of Republican abuses as a chief example of what happens when politicians are allowed to use unlimited taxpayer dollars and the formidable power of Congress to attack their political foes.

There is at least one point of agreement: Despite the early claims to the contrary by the Obama administration, both Democrats and Republicans conclude security measures in Benghazi prior to the attacks “were woefully inadequate” as a result of State Department decisions.