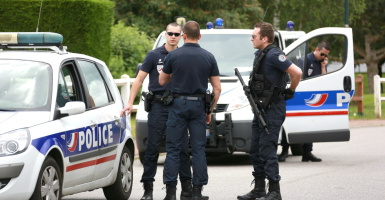 Anyone who has opened a newspaper over the last 18 months will know that Islamist terrorist atrocities are now disturbingly common. (Photo: Photopqr/le parisen/Maxapp/Newscom)

The Islamic State has struck in Europe again. Yet, with media attention focused on the terrorist attack in Orlando, it has gone somewhat under the radar.

Larossi Abballa stabbed to death a French policeman, Jean-Baptiste Salvaing, outside his own home in Magnanville, France. He then went inside and stabbed his (as yet unnamed) partner to death.

The couple’s son, just 3 years old, was held hostage throughout. Abballa, who had already been jailed in 2013 for past terror offences, declared his loyalty to the Islamic State, also known as ISIS, before police stormed the home and killed him.

Anyone who has opened a newspaper over the last 18 months will know that Islamist terrorist atrocities in France are now disturbingly common. The massacre in Paris last November, carried out by ISIS, was the most gruesome proof of this. Specifically, however, this type of crude attack on police officers is also depressingly common.

An audio message released on Sept. 21, 2014, from ISIS’ external operations emir, Abu Mohammed al-Adnani, implored ISIS’ Western supporters to “strike their police, security, and intelligence members.” He called for the targeting of the U.S., Canada, Australia, and Europe (particularly France), as well as “any other disbeliever from the disbelievers waging war.” Al-Adnani gave permission for the murders to take place “in any manner or way however it may be.”

It only took two days for someone to take up the call. Abdul Numan Haider stabbed two police officers outside their station in Melbourne, Australia. Haider, who Australian intelligence agencies suspected was planning to travel to Syria before having his passport canceled, was shot and killed during his assault.

Bertrand Nzohabonayo would replicate this plot three months later in Joué-lès-Tours, France. He injured three police officers with a knife, before a fourth officer shot and killed him. Nzohabonayo had uploaded an ISIS flag to this Facebook account just before carrying out his assault.

The police were targeted again—twice—in January 2016. In Philadelphia, Edward Archer shot and injured a police officer who was sat in his vehicle. Following his arrest, Archer pledged allegiance to ISIS. Just days later, Tarek Belgacem, a Tunisian carrying a meat cleaver and documents supportive of ISIS, attempted to storm a Parisian police station. He was shot and killed.

It is not just attacks carried out by individuals that see law enforcement targeted. They were also singled out for targeting as part of an ISIS cell that was disrupted in Verviers, Belgium, in January 2015; and by an ISIS-inspired London cell, arrested in September 2014, for planning drive-by shootings. It should also be remembered that police officers were killed in both the al-Qaeda in the Arabian Peninsula-linked plot against Charlie Hebdo in January 2015 and in Amedy Coulibaly’s ISIS-inspired murders shortly afterward.

Such trends are very clearly unacceptable. Yet, ISIS and those inspired by them still pose a grave danger to the law enforcement community and will likely do so for the foreseeable future. The only response of the U.S. and its allies must be a redoubling of efforts to comprehensively defeat ISIS, al-Qaeda, and the entire ideology that animates such groups.