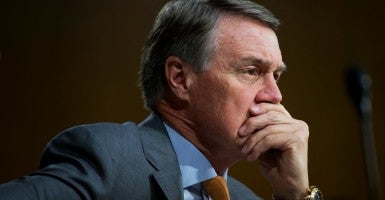 “There’s no way a company could survive being run the way we run things here." A first time politician, Sen. David Perdue, R-Ga., made his name in business before going to Washington. (Photo By Tom Williams/CQ Roll Call)

Before he made his first million, before he did business on six continents, and before he became a Fortune 500 CEO, David Perdue got his start picking peaches for about 40 cents an hour while growing up in Macon, Georgia.

There his father taught him always “to add value,” Perdue says while recalling the stifling summer work from his air-conditioned office in Washington, D.C.

“He told me years ago, ‘David, don’t ever worry about the job ahead of you; just take care of the one you’ve got now.’”

And now as the junior U.S. senator from Georgia, Perdue, 66, says the job has changed but the principle remains the same. In the Senate, he’s trying to leverage his private sector expertise to solve the public sector’s financial problems.

“We owe $19 trillion, we’re in a debt crisis,” Perdue says matter-of-factly in an interview with The Daily Signal. Then after some quick arithmetic, he notes that the national debt combined with future unfunded liabilities amounts to “about a million dollars per household.” Still, the debt doesn’t worry Perdue as much as the interest liability does. Should those rates rise—and Perdue is confident they will—he predicts the country won’t be able to make the minimum interest payments.

For the past seven years, the Federal Reserve has targeted rates at an artificially low level, around 0.25 percent, in hopes of easing America’s climb out of the subprime downturn. But in December, and for the first time in almost a decade, the Fed raised interest rates a quarter of a point, to 0.5 percent.

In Perdue’s estimation, that uptick amounts to $50 billion annually.

If those rates go higher—and Federal Reserve Chairwoman Janet Yellen has indicated already that the Fed soon may increase them—he predicts the country could have another “lost decade” like the 1970s, when interest rates peaked near 20 percent.

But those numbers and that history lesson hasn’t convinced all of Perdue’s colleagues.

Sen. Ed Markey—who sits next to him on the Foreign Relations Committee—in April said the “debt that we have is not actually right now a threat to our country.” The Massachusetts Democrat added there is a “more realistic and honorable way of talking to the American people about it.” For the most part, Perdue and his wife, Bonnie, stayed out of the spotlight until he decided to run for Senate in 2014. (Photo: Erik S. Lesser/EPA/Newscom)

Still, Perdue says he’ll keep raising the alarm because, he insists, the national debt is the biggest threat facing the United States.“This merry-go-round is going [to] stop,” the Georgia businessman warns, “and when it does, we will end up in a very bad place unless we find a way to control it.”

But while he will admit that the challenges are daunting, Perdue won’t say they’re insurmountable.

The son of two schoolteachers, Perdue excelled academically, earning an industrial engineering degree from Georgia Institute of Technology in 1972 before returning to the university to earn a master’s degree in operations research three years later.

Met with economic stagnation at graduation, Perdue redesigned his engineering education to land a job as a business consultant. That career would take Perdue jet setting around the globe, to live and work in places like Singapore, Hong Kong, and Paris.

Starting in the late 1990s, Perdue earned a reputation on Wall Street as a turnaround technician when, as CEO of Reebok and Dollar General, he piloted both back from the brink of financial disaster.

He’s certain the United States can do the same.

“The problems that we have here are not that complicated,” Perdue says. “The [discretionary] budget of the United States government is only just a little over a trillion dollars.”

For comparison, he points to retail giant Wal-Mart, which he says runs on about half of that number. “They get their budget done on time, they manage to run a surplus, and they do it without all the drama.”

Ask Perdue what steps he’d take if given control of the nation’s balance books and he seems to come alive:

“If I was coming in as CEO, I’d call all hands on deck, full stop,” he says, straightening up in his chair with sudden energy. Motioning at his staff in the room, he doles out imaginary duties: “You go fix Social Security! You go fix Medicare! Bring me back a solution in a week! Then we will garner all our energy and resources toward those life-threatening issues.” The son of schoolteachers, Perdue’s first job was picking Georgia peaches before going on to Wall Street and then the Senate. (Photo: Erik S. Lesser/EPA/Newscom)

But the businessman has learned that the Senate lacks the initiative and sense of urgency found in most boardrooms.

In corporate America, Perdue explains, “you’re survival oriented and you’re results oriented.” In the D.C. bubble, he says, there’s “an environment that’s really more process oriented, not so much focused on the results.”

He blames a self-interested political class for using their posts to consolidate their power. Borrowing a line, he wryly jokes of Washington’s political class, “I’ve seen the enemy and it’s us.”

“Democracies have a problem living past a couple hundred years,” Perdue notes, referencing the radical French revolutionary Maximilien Robespierre by name. “The situation is that once politicians get elected, they tend to want to get reelected … that drive causes you to give away things.”

To get his colleagues to set aside their own interest and treat the debt seriously, Perdue says he relies on persuasion. With an analytical mind, he regularly rattles off lists of figures about the debt, deficits, and spending to make his case, quipping that he can “bring any cocktail party to its knees with this sort of talk.”

But Perdue doesn’t try to bull-rush other senators with these facts. And he doesn’t have a secret business plan hidden in his briefcase. He insists instead that “the solutions are already out there.” That founding principles such as limited government and individual liberty are the ones that actually work.

And he tries to add value by “facilitating the push to get people to recognize that we’ve got to make tougher decisions.”

Perdue says he believes that doesn’t require the business acumen of a Wall Street executive as much as it does the perspective of an outsider. That’s the role Perdue tries to fill, as “someone who can say, ‘Wait a minute, this is not reasonable. What you’ve gotten used to here [in Washington] is not acceptable back home.’”

To get Washington’s fiscal house in order, Perdue has recommended changing the way the federal government spends money. From his seat on the Senate’s Budget Committee, he has pushed for reform of the 1974 Budget Control Act, a laborious and technical process governing federal spending.

The dysfunctional system has worked only four times in more than 42 years, Perdue points out, noting that the last time was 1994.

“There’s no way that a company could survive being run the way we run things here,” he says.

The committee has begun to re-evaluate the unwieldy process. Just recently, Budget Chairman Michael Enzi, R-Wyo., began circulating a discussion draft of a plan to overhaul the entire budget system.

It’s a small step toward addressing an inefficiency that Perdue regularly rails against. And the Georgia senator argues that much more will need to be done for the United States to avoid an economic catastrophe like the ones plaguing Greece and Italy.

So far, the U.S. has been slow to respond to the threat posed by government spending and debt, he says.

“We’re not always the earliest to know we’re in a crisis,” Perdue says. Still, the businessman remains bullish on the nation’s prospects, explaining, “Americans are the best in world history at dealing with a crisis.”

Until then, Perdue will try to add value by raising alarm.

Editor’s note: Discretionary has been added to, “The [discretionary] budget of the United States government is only just a little over a trillion dollars” for clarification.