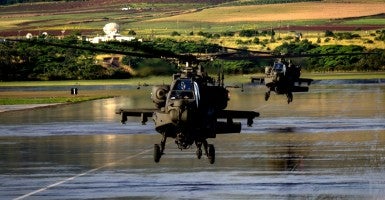 Adam Lemon is a member of the Young Leaders Program at The Heritage Foundation.

Today, the United States and its allies face a wider and more serious array of threats than at any point since the end of the Cold War a quarter of a century ago. While the demand for troops to confront these challenges is increasing, the size and readiness of the U.S. Army is in steep decline.

Years of budget cuts have rapidly shrunk the Army to a size unseen since before World War II. The preparedness of the troops has been damaged as well. The Army has been forced to cut training and next-generation weapons programs that are vital for preparing the force for 21st century conflict.

Gen. Daniel B Allyn, the vice chief of staff of the Army, has witnessed firsthand the damage done by the defense budget cuts. Allyn will discuss the state of the U.S. Army at The Heritage Foundation on Monday, June 13. Before rising to the No. 2 position in the Army, Allyn served in a number of combat commands and is uniquely positioned to discuss the serious challenges facing the U.S. Army.

Among these will be training and reassuring allies, destroying the Islamic State, and deterring Russia, China, and Iran. This is all in addition to maintaining a lasting presence in Afghanistan. The decline in numbers will continue through 2018, when the Army is expected to bottom out at 450,000 troops.

Since budget cuts began, the Army’s readiness to deploy and fight effectively in the event of conflict has suffered dramatically.

The Pentagon has tried to remedy this by decreasing or cutting funding to several Army weapons modernization programs in order to better fund readiness and training. Yet with all this effort, according to Pentagon officials only one-third of active and reserve Army brigade combat teams are sufficiently ready for combat. Of the roughly 20 active and reserve teams that are ready for combat, 11 are already assigned to combatant commands, leaving only nine brigade combat teams for unforeseen contingencies.

In addition to poor readiness in general, the Army has focused so much on dealing with insurgencies in Iraq and Afghanistan that it is ill-prepared for conflict with conventional threats like the rapidly expanding and modernizing militaries of Russia and China.

As Congress debates the 2017 defense authorization bill, it must recognize that the Army is smaller, faces greater threats in more varying regions of the world, and is ill-prepared to fight a modern war. Our military commanders have been raising the alarm, but Congress is yet to act decisively. Join The Heritage Foundation on Monday, June 13, for an important discussion about the future of the Army.