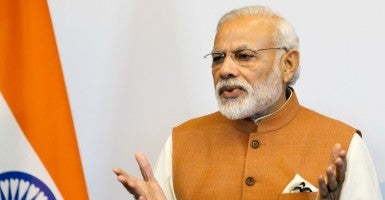 Indian Prime Minister Narendra Modi will visit the U.S. this week for the fourth time in two years. While in Washington, he will hold summit-level meetings with President Barack Obama, address a joint session of the U.S. Congress, and meet with the heads of several think tanks.

The visit is an opportunity to showcase the notable gains made in Indo-U.S. relations since Modi took power two years ago and to maintain momentum in ties in the run-up to the U.S. presidential poll in November.

Improving relations with India is one of those rare issues that enjoy strong bipartisan support. Congressional members on both sides of the aisle view India as an important player in balancing China’s rise and helping to secure a peaceful, democratic Asia with free and open seaways.

The importance of India as part of the U.S. Asia pivot strategy has been heightened in recent years as China has become more assertive in the South China Sea. House Speaker Paul Ryan, R-Wis., called the U.S.-India relationship “a pillar of stability in an important region of the world.”

At the heart of improved U.S.-India relations over the last couple of years has been progress on the Defense Trade and Technology Initiative that was launched in 2012 with the goal of breaking down bureaucratic barriers and other obstacles to enhancing defense trade. The two sides have announced six “path finder” projects, including co-developing jet engine technology and aircraft carrier systems and co-producing unmanned aerial vehicles and specialized equipment for military transport aircraft.

There is hope that India will soon sign a logistics sharing agreement that would allow the U.S. and India to access each other’s military supplies and refueling capabilities through ports and military bases. This would mark a major milestone for the U.S.-India defense partnership. The U.S. also is backing India’s membership in the Nuclear Suppliers Group to integrate India into the global nonproliferation framework.

Another possible outcome of the visit is U.S. backing for full Indian membership of the Asia-Pacific Economic Cooperation grouping. With India recently becoming the top destination for foreign direct investment and its economic growth rate set to reach 7.6 per cent this year, there is renewed optimism in the Indian economy. In the past, the U.S. has welcomed Indian interest in joining the Asia-Pacific Economic Cooperation but has stopped short of publicly backing its formal membership.

Another area that is ripe for forward movement is homeland security cooperation. The two sides recently made progress on a data sharing agreement to exchange information in their terror databases. The agreement would bring India into the FBI’s Terrorist Screening Center, which consolidates several terrorist watch lists from multiple countries. With the agreement, India would become one of 30 countries allowed access to the database.

Although unlikely to be a major point of discussion, the religious freedom issue may come up in Congress. There has been some concern about a series of church desecrations that occurred in New Delhi 18 months ago and an incident last fall in which a Hindu mob killed a Muslim man for allegedly consuming beef.

India’s recent decision to refuse visas for officials from the Commission on International Religious Freedom has drawn attention to the issue. Modi has spoken up in defense of religious freedom in the past, but there is a sense that he could do more to rein in Hindu hard-liners that support his government.

Modi’s visit will highlight the important strides the two countries have made in expanding security and defense cooperation. The robust bipartisan support in Washington for building Indo-U.S. ties gives hope that the next U.S. administration will sustain the progress made during the last two years.