Memorial Day Tributes Should Include What Soldiers Fought For 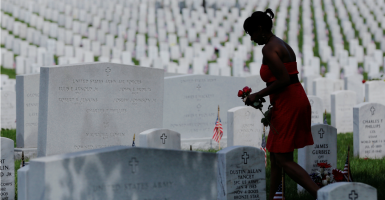 "We should guard their graves with sacred vigilance," said Grand Army of the Republic Commander in Chief John Logan. (Photo: Lucas Jackson/Reuters/Newscom)

Is Memorial Day a vestigial holiday? Today, a plurality of Americans believe it was a mistake to drop the atomic bombs and many have little understanding of World War II, the Korean War, or the Civil War. It is our duty, not just to commemorate our fallen soldiers, but to understand the causes and principles they fought and died for.

On May 1 in 1865, a Charleston school superintendent took a group of black schoolchildren to a mass grave to place flowers and give tribute to the men buried there.

“Quietly the ugly mounds were covered with flowers strewn by black hands which knew only that the dead they were honoring had raised them from a condition of servitude,” wrote historian Paul H. Buck.

The 249 Union soldiers entombed in that grave died in a Confederate prisoner of war camp and had been ignominiously dumped in a series of trenches just outside the South Carolina city during the final days of the Civil War. That the moving homage occurred in the shadow of Fort Sumter was not lost on Americans who heard the story; those Union soldiers died so that the undivided nation would live and countless other Americans could be free.

The tradition of decorating the graves of fallen soldiers spread like wildfire across the country. The Grand Army of the Republic, a powerful Union veteran organization, pushed to make May 30 a national day of commemoration, and it became one in 1868.

Grand Army of the Republic Commander in Chief John A. Logan gave an order describing what the new Memorial Day holiday would be about. He wrote that the lives of the nation’s soldiers “were the reveille of freedom to a race in chains, and their death a tattoo of rebellious tyranny in arms.”

Logan commanded Americans to always honor the memory of those who had died for their country, saying:

We should guard their graves with sacred vigilance. All that the consecrated wealth and taste of the nation can add to their adornment and security is but a fitting tribute to the memory of her slain defenders. Let no wanton foot tread rudely on such hallowed grounds. Let pleasant paths invite the coming and going of reverent visitors and fond mourners. Let no vandalism of avarice or neglect, no ravages of time, testify to the present or to the coming generations that we have forgotten, as a people, the cost of free and undivided republic.

Memorial Day commemorations would eventually be expanded to honor the dead of all our wars.

Today, Americans almost universally give tributes and praise to servicemen—the practice of spitting on soldiers is thankfully far less frequent than it was at the time of the Vietnam War. However, while soldiers are rightly treated personally with respect, there is growing national amnesia about our past conflicts, and why so many brave men had to die.

President Barack Obama made the unprecedented decision to travel to Hiroshima at the start of the Memorial Day weekend. Though the administration denied it, many Americans and people across the globe saw this act as an apology for dropping the atomic bombs on Japan at the end of World War II.

In his Hiroshima speech, Obama made no mention of the causes of war—no references to the attack on Pearl Harbor. Instead, he painted a picture in which violence itself was the problem rather than tyranny, totalitarianism, and the unspeakable atrocities committed on their behalf.

Obama briefly mentioned the Declaration of Independence in his address, but unlike Lincoln at Gettysburg, the president never spoke of the “brave men, living and dead” who fought to save a nation “conceived in liberty.” He never gave the command, like Lincoln, to “never forget” what American soldiers had done to rid the world of oppressive despotism.

Instead, what was left were vague notions of “mistakes” and “moral revolution.”

As Bruce Klingner, a senior research fellow for Northeast Asia at The Heritage Foundation’s Asian Studies Center, wrote for The Daily Signal, “[Obama’s] comments reflect an aloof view disdainful of all violence, lumping aggressors and defenders together. Hiroshima was a tragedy but so were all the lives lost in the preceding years of conflict.”

America was born in a tradition of liberty, it stood for over two centuries as a bastion of freedom, often alone in a sea of monarchical, authoritarian, and absolutist governments. Memorial Day must be more than a short remembrance for those who have died for our country, it should also be a reminder of what made America great and worth dying for in the first place.