Remembering Those Who Never Came Home 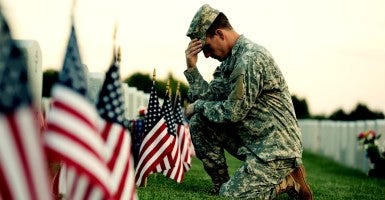 We must never—ever—forget that America is the home of the free because of the brave. (Photo: iStock Photos)

During the mid-2000s, I attended my son’s graduation from the Virginia Military Institute in Lexington, Virginia, in a ceremony where the commencement address was given by then-Secretary of Defense Bob Gates.

Like many who attend graduations, I have no recall of what Gates said to the collective students, faculty, and families that day. I do recall that it came at a very difficult time overseas for U.S. forces in Iraq and Afghanistan.

The other thing I remember: More than 50 percent of that Virginia Military Institute class stood up to be commissioned into the armed forces of the United States.

As they stood, I could feel myself start to well up. I turned away from my wife so she wouldn’t see, but she knew—and felt the same surge of patriotism I did.

As a veteran myself, I couldn’t have felt prouder of the young men and women, including my son, who were volunteering to serve their country in its time of need, despite the mortal dangers that clearly faced them in the war on terror.

Of course, they were like so many others who had served this great nation before them; who bravely and nobly went in harm’s way to defend our liberty and way of life.

Many would not return to their loved ones or their fellow service members who, truth be told, love them just as much as their kith and kin do.

Next to my desk, I keep a tattered piece of paper with a prayer on it that comes from the Archdioceses for the Military Services that I found at St. Peter’s Church in Washington, D.C. The prayer says it well:

Lord, hold our troops in your loving hands.

Protect them as they protect us.

Bless them and their families for the selfless acts they perform for us in our time of need.

I ask this in the name of Jesus, our Lord and Savior.

Nor should we forget their families, who have shared their most prized possessions with our armed forces for the good of this country. “They also serve who only stand and wait,” as the poet John Milton noted.

Memorial Day is but a brief moment in time every year when a great country takes pauses to rightfully and reverently thank those both living and dead who have served for their courage and sacrifices on our behalf.

We must never—ever—forget that America is the home of the free because of the brave.