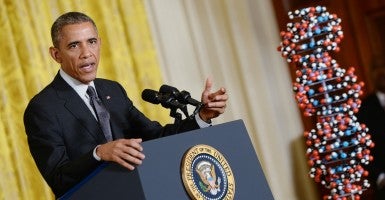 The Obama administration has proposed regulatory changes in payment for Medicare Part B drugs. They’re looking to impose a broad, multi-year change through a demonstration project.

Medicare demonstrations routinely test payment or delivery models in pilot programs, make a report to Congress—and lawmakers then either enact or reject the model as a statutory basis for Medicare payment.

But Obama’s proposal goes well beyond a normal pilot program, testing to see what does and doesn’t work among a relatively small, randomly selected, group of providers.

The “test program” would be a nationwide project, imposing major payment changes that would run for several years. It would, in effect, create an administratively imposed Medicare payment for an entire class of medical professionals, mostly physicians.

Beginning this year, the Center for Medicare and Medicaid Innovation (CMMI), an agency created by the Affordable Care Act (ACA), will change Medicare reimbursement for cancer drugs and certain other injectable therapies, mostly dispensed in doctors’ offices or in outpatient hospital settings.

While testing different payment systems and encouraging cost-effective drug therapies is obviously good policy, the radically broad use of demonstration authority in this instance amounts to executive overreach.

The program would be another mandate, and one that exceeds statutory authority. The Federation of American Hospitals notes that:

We find nothing in the law or legislative history that supports such a delegation of authority, and in fact the limited legislative history on this provision indicates the exact opposite. Notably, nowhere does the law expressly state that CMS can make models mandatory.

In 2015, Part B drug costs amounted to $22 billion, and increased on average 8.6 percent since 2007. Medicare Part B drug payment today is based on the average sales price of a drug, plus 6 percent.

In the first phase of this change, the administration proposes to change Part B drug payment to a flat fee of $16.80 per day and to reduce the “add on” percentage from 6 percent to 2.5 percent.

(The 2.5 percentage metric appears to be arbitrary.)

The assumption, in any case, is that this will incentivize physicians to use lower cost drugs that are as equally or more effective in improving patient outcomes than higher cost drugs.

In short, the new drug payment model is designed to improve medical outcomes and save taxpayers’ money. Beyond this basic payment change, the rule authorizes widespread testing of different payment models.

Beginning in 2017, the Center for Medicare and Medicaid Innovation will test different administrative payment models or “value-based” reimbursement strategies.

The Risks For Those Seeking Cancer Drugs

The patient access problem is worrisome, particularly for residents in rural areas who depend on local physicians for the administration of cancer drugs.

As a general rule, Medicare payment is almost always lower than private payment for most medical services. Smaller private medical practices would doubtless be disproportionately damaged by reimbursement reductions.

The American Cancer Society reports that small oncology practices have already declined from 64 percent in 2014 to 41 percent in 2015, and cancer patients, particularly in rural America, already suffer serious access problems. If such physicians limit their practices, or worse, withdraw from the field, these patients will have to travel even greater distances to get vital therapies to combat this deadly disease.

Medicare’s administrative payments are plagued with problems inherent in bureaucratic formulas. Unlike real market payment, compliance with a general Medicare regulation rather than a particular response to patient demand is the condition of reimbursement.

In any case, payment reductions will hurt smaller practices the most, encouraging patients to seek hospital-based therapy.

A shift of patients from less expensive physicians’ offices to more expensive hospital outpatient providers would be another classic “unintended” consequence, hurting patients and taxpayers alike.

The U.S. Oncology Network, a national organization of doctors treating cancer patients, reports that patient costs for cancer drugs are “generally $134 less per dose” if the patient is treated in the doctor’s office rather than an outpatient hospital setting.

Moreover, delivering quality care through “value-based” payment—securing value for Medicare dollars through administrative payment systems, suffers from the same vagueness as other initiatives in this regulatory agenda, such as Medicare physician payment.

It seems that the underlying assumption is that Americans will secure higher quality care through better central planning.

It is still not clear, for example, how exactly the Medicare bureaucracy will measure quality.

The Pew Charitable Trusts’ thus commented, “CMS has not identified the measures that would be used to evaluate changes in provider practice patterns or to assess quality of care.”

This would argue for a surgical approach, careful and targeted testing, rather than the blunt instrument of a national mandate.

As evident from the May 17th House Energy and Commerce hearing, an increasing number of Congressmen, patient advocates and medical organizations are lining up in opposition to the Medicare Part B drug rule, mostly out of concern over the scope, the design and an anticipated negative impact on patient care and related unintended consequences.

A total of 242 members of Congress, including some Democrats, signed a letter to the administration requesting withdrawal of its Medicare Part B drug rule. There are substantive policy problems with the administration’s latest health policy initiative, but beyond that, Congress has a duty (once again) to repudiate and repel administration overreach.