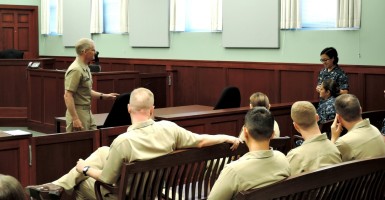 Nine years into its career litigation track, the Navy is starting to reap the rewards in aligning itself with best practices.(Photo: U.S. Navy JAG Corps/ Flickr/ CC BY-NC-ND 2.0)

The Army and Air Force are engaged in an all-out legislative battle to preserve the status quo and kill a Senate and House amendment requiring them to establish a career litigation track for select judge advocates. This change would benefit both services as well as the professional careers of their individual lawyers, crime victims, and defendants alike.

Their arguments against the amendment, no doubt, are the same arguments that were made by senior Navy judge advocates general (JAGs) opposed to the Navy’s nascent career litigation track over a decade ago.

Navy leadership decided to align itself with the rest of the nation’s legal community and best practices, establishing a career litigation track for a small percentage of select Navy JAGs in 2007. Almost a decade later it is showing signs of success.

So why are the Army and Air Force vehemently against a Senate amendment in this year’s National Defense Authorization Act?

The answer is that they simply don’t like change, and are caught in old think. Their arguments can be boiled down to three main objections, each of which lacks merit: 1) a career track is unnecessary, 2) leadership needs the flexibility to move JAGs for operational necessity, and 3) establishing a career track would disrupt and change the way they practice law.

I plan to address each objection in a series of op-eds, but in this piece I’m going to provide some needed background information on how the Navy worked to improve its JAG Corps.

Lessons to Be Learned

Before 2004, each of the judge advocates general of the Army, Navy, and Air Force subscribed to the party line that all judge advocates should have a broad career. That necessarily included tours of duty as a military prosecutor and defense counsel, and working in legal assistance, command services, operational law, or any number of other areas of the law where JAGs are found.

To be competitive for higher rank, JAG officers needed to move from legal job to legal job in the service, and demonstrate the capacity for leadership and subject matter knowledge. Judge advocates would transfer from one job to the next after two, three, or at most four years, often making them a jack of all trades, but a master of none. Junior judge advocates would try a few courts-martial, and then move on to non-court-martial jobs, often never to see the inside of a courtroom as a litigator again.

This happened because the judge advocate general of each service wanted JAGs to have broad experience, and, perhaps more importantly, wanted the flexibility to assign judge advocates to jobs as appropriate. The concept of a specialty track, in litigation, tax, operational law, or anything was unheard of, as leadership believed such a track would interfere with their ability to assign JAGs.

Furthermore, only those JAGs with the most impressive career paths, which necessarily included myriad jobs throughout the decades, would be eligible to compete to be a flag or general officer, and potentially the judge advocate general of that service.

As a result, those judge advocates who truly wanted to dedicate their careers to complex and high volume litigation and achieve success in litigation, left the service after a few tours, because they realized that they couldn’t remain in the courtroom for a career. If they tried, they would inevitably fail to be promoted. Thus, they left the service and became state or federal prosecutors, public defenders, or engaged in civil practice.

During the 2005-07 timeframe, the judge advocate general of the Navy decided to study how best to implement a career litigation track. He realized that actual courtroom experience, trying contested case after contested case, was a perishable skill.

The then-system of Navy JAG career progression did not allow talented, but inexperienced, litigators to hone their craft though a 20-year career. And he realized that compared to civilian counterparts in district attorney or public defender offices, our JAGs were simply not experienced enough.

A Radical Thought at the Time

The Navy did something that, at the time, seemed radical. It decided that to create a career track, there would have to be trade-offs. Judge advocates that were selected for the career track would be allowed to spend most of their careers in military courtrooms, but would not be competitive for promotion to admiral.

Leadership banked on the fact that there would be some Navy judge advocates that yearned for a career in the courtroom more than they wanted to become an admiral.

And they were right.

Proven military justice experts could compete, later in their careers, to become a trial or appellate judge. And the top judge in the Navy, the chief judge of the Navy, held by a Navy captain, retires as a one-star admiral.

Finally, the Navy JAG Corps studied how to implement the career litigation track for two years. They met with senior Navy leaders, commands, and all relevant stakeholders in order to learn how best to implement the program without a disruption of service to the fleet.

The Army and Air Force JAG Corps simply don’t want to change. But if Congress required them to do so, they would, and it would benefit everyone in the long run.

Of the Navy’s 879 active duty JAGs, 77 are in the career litigation track. Those track attorneys have more litigation experience and are better trained than their predecessors, and will only continue to grow in professionalism and experience over time.

By aligning themselves with all professional district attorney and public defender offices in the country, the Navy has proven to the other services that a career litigation track is possible, and indeed necessary to fully develop high-quality, professional career litigators. Military crime victims and those accused of crimes in the military deserve no less.