IRS Admits Tax Code Is Too Complex to Enforce 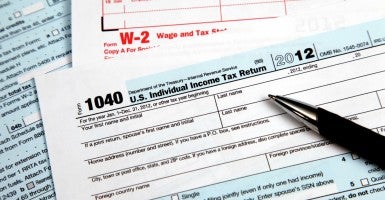 There is no easy fix to balance the budget in the short-term. (Photo: iStock Photos)

In an ideal world the federal government would collect all of the taxes that it was owed—and then spend only what it intended to. Unfortunately, things aren’t that simple.

Instead, every year we have a “tax gap,” which is the difference between what the government believes it is owed, and what it actually takes in, and “improper payments,” which refers to the government sending money to those it doesn’t mean to (paying benefits to deceased persons, for example).

There are two types of taxpayers that contribute to the tax gap. There are willful tax evaders, who knowingly underreport their income or overstate their deductions, and there are taxpayers that make errors on their tax forms accidently. As the tax code has become increasingly complex, both voluntary compliance and enforcement have become ever more difficult. Even the IRS admits that “the complexity of the tax code makes the tax law too difficult for taxpayers to understand and for the IRS to administer.”

One way to simplify the tax gap would be to move toward a flat consumption tax. As explained by Curtis Dubay, a research fellow in tax and economic policy at The Heritage Foundation, by incentivizing saving and investment, a flat consumption tax would increase economic growth by up to 15 percent in 10 years. Such a tax could be realized without affecting the overall distribution of the tax system, a common criticism of flat consumption taxes.

A flat consumption tax would also reduce the tax gap and ensure that people pay the correct amount of taxes. The simplicity of a flat tax would help taxpayers understand and voluntarily comply with the tax code and limit opportunities for tax evasion. A flat consumption tax would stimulate the economy and reduce the tax gap, all without affecting the overall distribution of the tax code.

Although the tax gap ($385 billion) and improper payments ($137 billion) add up to more than the deficit for the 2015 fiscal year ($468 billion), they can never be completely eliminated. There is therefore no easy fix to balance the budget in the short-term. The size of the U.S. economy and government make it impossible to eliminate all instances of waste, fraud, and abuse, and to collect every penny that is owed to the government.

Unfortunately, many politicians focus on these issues instead of the real drivers of our national deficit: growing spending on health care and retirement programs. However, by simplifying the tax code and making commonsense reforms to federal spending programs like Medicare and Medicaid, both the tax gap and the number of improper payments could be reduced.

According to the Government Accountability Office (GAO), improper payments are a “significant and pervasive government wide issue” and over $1 trillion has been incorrectly distributed since 2003. Seventy-six percent of these mistakes are made by three major programs: Medicare, Medicaid, and the Earned Income Tax Credit (EITC). Fraud in these programs has proven difficult to eliminate.

In the 2015 fiscal year, the Health Care Fraud and Abuse Control Program spent nearly $1 billion to combat improper payments in the Medicare and Medicaid programs. While this program recovered almost $4 billion that had been improperly dispensed, there was still $90 billion spent incorrectly in 2015 that was never recovered.

The sheer size of these programs makes eliminating fraud difficult and with the rapid expansion of people eligible for Medicare and Medicaid, combating these abuses will become increasingly difficult. These programs require structural changes that will make fraud more difficult.

One possible solution is to shift both Medicare and Medicaid to premium support payment systems. Fraud is less pervasive under a premium support model because money wasted directly hurts the health insurer’s bottom line. This creates a strong economic incentive for health insurers to identify and eliminate fraud and abuse. If Medicare and Medicaid were transformed into premium support programs, it would put them on a more sustainable fiscal path, increase the quality of care that beneficiaries can access, and reduce fraud and abuse within these programs.

The Earned Income Tax Credit also has a significant amount of improper payments every year. The IRS estimates that between 28 percent to 39 percent of all the Earned Income Tax Credit payments were issued improperly in 2013, costing the taxpayer up to $24 billion. The most common methods used to claim a higher EITC refund are: misreporting of income, non-parents claiming children who are not residing with them, and married couples filing as singles (EITC has a marriage penalty).

There are several simple reforms that would drastically reduce improper Earned Income Tax Credit payments. Eligibility for the Earned Income Tax Credit should be limited to custodial parents and legal guardians. The IRS should also require income verification before any payments are made. Finally, the marriage penalty should be incrementally reduced.

While there is no one solution that will eliminate the tax gap and improper payments, there are a variety of potential reforms that would reduce the amount of fraud and abuse of federal programs. Medicare, Medicaid, and the tax code are the biggest problems and urgently need reform. However, many other government programs also have serious problems. To address these issues, Heritage’s Blueprint for Balance details many more specific reforms to limit government waste and limit the federal government to its proper scope.

Curtis Dubay and Rachel Sheffield contributed to this piece.

Brian Drockton is a member of the Young Leaders Program at The Heritage Foundation.