How Russia Is Lying to Us About Syria 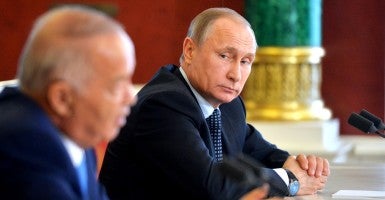 Whether it is in Georgia, Ukraine, or Syria, Russian President Vladimir Putin will do anything to make it seem that Russia is a global power on equal footing with the United States. (Photo: Alexei Druzhinin)

Alexis Mrachek is a research assistant for Russia and Eurasia at The Heritage Foundation.

What seemed like an encouraging headline a few weeks ago was really all smoke and mirrors—far from pulling out of Syria, Russia has been rolling in even more troops and equipment. Russian President Vladimir Putin has once again proven that he cannot be trusted.

On March 14, Putin began ordering troops to return home from Syria. It is true that some troops did leave the country, but we now know that this announcement was more about distracting the world and portraying Russia as part of the solution in Syria rather than being part of the problem.

Even though Russia might have removed some troops, it left behind advanced anti-aircraft systems, plenty of fighter planes and bombers, and hundreds of troops and special forces. Don’t forget that Russia entered Syria last year with only a naval base located at Tartus and is now leaving Syria with an additional air base at Hmeimim.

Less than a month later, evidence was released of more troops filtering back into the war-torn country. The cover story was that they were supposedly there to clear out a number of mines, but no one really knew their true intentions.

Russia is still conducting airstrikes, even after their cessation of hostilities agreement with the United States. Russian special forces and air force helping Assad’s army were involved in fighting for the ancient city of Palmyra. There is talk that a Russian-supported offensive against Aleppo is in the works.

Currently, Russia is transporting artillery units into northern Syria and the White House is definitely concerned. According to Ben Rhodes, a deputy national security adviser for the U.S., President Barack Obama told Putin that “Russia should focus its efforts on the diplomatic process.” However, it doesn’t seem like Moscow will heed this instruction.

As shown, Russia doesn’t exactly have the best track record for keeping its word. Moscow routinely violates its cease-fire arrangement with Ukraine and continues to supply weapons to Ukrainian separatists.

So why is Russia even in Syria to begin with? One explanation could be its desired military presence around the world to show that it is a global power. Another explanation is to use its influence in Syria to secure a stronger negotiating position on other issues like Ukraine.

Clever propaganda run directly from the Kremlin has largely affected the world’s perception of the country. The Kremlin wants the world to think of Russia as part of the solution to many of the world’s problems when the opposite is true. The Russian people have done poorly in a declining economy while Putin and his cronies become richer and richer each year.

Whether it is in Georgia, Ukraine, or Syria, Putin will do anything to make it seem that Russia is a global power on equal footing with the United States. As long as the West lets him get away with it, Putin will keep on lying. It is time for the world to wake up.