Obama’s Following Through With Promise to Bankrupt Energy Companies 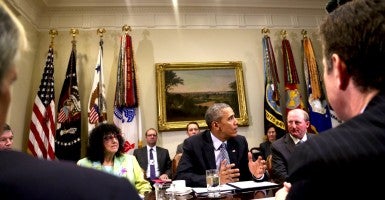 The economic pain from this will spread to all Americans—both as taxpayers and as energy consumers. (Photo: Aude Guerrucci/UPI/Newscom)

Both sets companies have two common elements. They’ve all filed for bankruptcies and the federal government had a role in their demise.  The economic pain from this will spread to all Americans—both as taxpayers and as energy consumers.

Peabody, the world’s largest private coal company, announced it was filing for chapter 11 bankruptcy protection. Peabody joins a litany of other coal companies that have fallen on difficult times. A number of factors created the economic turmoil the industry is facing. Market demand for metallurgical coal, which is primarily used to make steel, dropped considerably. Cheap and abundant natural gas supplied from the shale boom in the United States resulted in fuel switching.

But the one culprit that policymakers can actually do something about: Federal government regulation.

This should come as no surprise since President Obama said in 2008 that:

If somebody wants to build a coal power plant, they can, it’s just that it will bankrupt them because they are going to be charged a huge sum for all that greenhouse gas that’s being emitted.

According to a recent report by the Energy Information Administration (EIA), more than 80 percent of the nearly 18 gigawatts of electric generating capacity retired in 2015 was conventional steam coal. The EPA cites the Mercury Air & Toxics regulation, which has enormous compliance costs and minimal direct environmental benefits, with 30 percent of coal retirement in 2015.

Global warming regulations will prevent the construction of new coal-fired power plants and could cause more of America’s existing fleet to retire. The Department of the Interior recently announced a prohibition on leasing of public land to coal companies while it “reviews” the leasing process (a procedure that will inevitably result in making it more difficult and more expensive for coal companies to lease federal land).

And the Mine Safety and Health Administration (MSHA) in the Department of Labor have promulgated a host of new rules that will increase the costs of mining coal and decision making authority away from individuals and instead empower Washington regulators to micromanage operations. Combined, the federal government’s regulations have had a Shaquille O’Neal-sized hand in driving out coal production.

The federal government’s regulations have had a Shaquille O’Neal-sized hand in driving out coal production.

Then there’s the second set of companies. Each bankrupt company in the second group received taxpayer dollars as part of the Department of Energy’s loan and loan guarantee programs. The government played a role in their failures by dangling taxpayer dollars for investments in alternative forms of energy technology, such as wind, solar or electric vehicles. In each instance, DOE lent money to companies that could not survive even help from the taxpayer.

Private investors look at taxpayer-backed loans as a way to substantially reduce their risk. Private companies can invest a smaller amount than they otherwise would have to. The government’s involvement in decisions that should be purely private investments skew the risk calculation and have resulted in economic losers.

The government’s preferential treatment contributes to uncompetitive companies entering into the market. For instance, Solyndra manufacturers sold their product for an average of $3.20 a watt. The manufacturing cost was more than $6.00 per watt.

The black eyes of the loan portfolio could also mean that the government invests in less risky projects or provide loans and loan guarantees to well-established companies. Thus, the government is awarding subsidies to investors that could secure private financing on their own they truly believed the project was worth the risk.

The government’s role in bankrupting energy companies speaks to two overarching problems with U.S. energy policy: overregulation and subsidization. Eliminating heavy-handed regulations that provide little to no environmental benefit and eliminating all energy subsidies will enable energy innovations and drive growth and success in the industry. Best of all, families and businesses will be the beneficiaries of the most reliable energy at the most competitive prices.