New Study: ‘Sex-Selection Abortion Is a Global Problem,’ Including in US 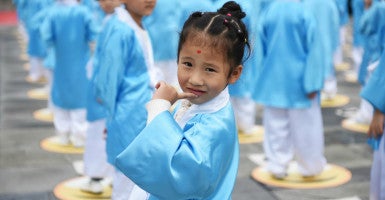 Is the U.S. following China's trend? According to the Lozier Institute, "China’s male population outnumbers females by about 33 million with a skewed sex ratio at birth of 115.88 in 2014." (Photo: Liu Xu Xinhua News Agency/Newscom)

In advance of a Thursday House hearing on a measure that would ban abortions based on gender, a pro-life group published new research, provided exclusively to The Daily Signal, that suggests that prenatal sex discrimination “occurs globally” and is a problem, “including here in the United States.”

“As Anna Higgins eloquently demonstrates in this latest paper, sex-selection abortion is a global problem, including here in the United States,” Dr. David Prentice, director of research at Charlotte Lozier Institute, the research arm of the Susan B. Anthony List, said in a statement to The Daily Signal. “Legislators who abhor discrimination should move swiftly to enact laws that prohibit the lethal discrimination that is sex-selection abortion.”

Sex-selection abortion refers to a situation where a person chooses to abort an unborn child based solely on that child’s sex. According to the Charlotte Lozier Institute, “prenatal discrimination can also be practiced pre-implantation by destroying embryos based on a per-implantation sex determination.”

On Thursday, the House Judiciary subcommittee on the Constitution and Civil Justice will hold a hearing to debate the Prenatal Nondiscrimination Act, which would prohibit abortion based on sex. According to the bill’s counterpart in the Senate, the legislation imposes criminal penalties on anyone “who knowingly” performs “or knowingly attempts” to perform an abortion knowing the procedure is sought based on the sex of the preborn child.

Anna Higgins, an associate scholar at the Charlotte Lozier Institute, will testify for the Republican majority at Thursday’s hearing. During the hearing, Higgins will reference the new Lozier Institute study, which argues that sex-selection abortion is the “real war on women.”

Some key highlights of that study include: