Reagan’s Defense Approach Is Needed Now More Than Ever 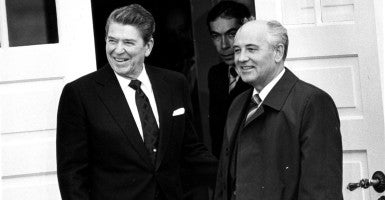 Regan Ratliff is a member of the Young Leaders Program at The Heritage Foundation.

Thomas Karako of the Center for Strategic and International Studies recently spoke on the continued threat of nuclear weapons at The Heritage Foundation’s “Missile Defense: More Critical than Ever.” At the event Karako emphasized that “despite what Reagan’s wish or hope, nuclear weapons are not impotent and obsolete, ballistic missiles are not impotent and obsolete, and we are going to be living with that for a very long time.”

Rebeccah Heinrichs, of the Hudson Institute, described the nuclear threat as “no longer a bipolar threat, but now a multipolar threat.”

This is certainly true. More countries than ever possess ballistic missile capabilities of increasing range and precision. A long-range ballistic missile can reach anywhere in the world in less than 33 minutes, which is why it is an imperative to continue to develop and deploy a comprehensive layered missile defense system.

The SDI program was a means to strengthen America’s overall position against the Soviet Union and create a robust defensive system that the president was content to share with the Soviets and others. Even back during 1980s, Reagan knew that the Soviet Union was not the only problem when it came to a ballistic missile threat.

Speaking with Secretary General Gorbachev during the Reykjavik summit in 1986, he said, “We must have a defense against others. The genie is already out of the bottle.”

Reagan opposed intentional ballistic missile vulnerability. He considered it inconsistent with U.S. values and U.S. way of life. Our future president should take a note from Reagan and develop the missile defenses which our national needs.