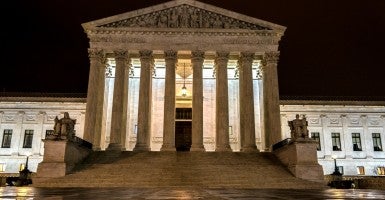 Ultimately, the government may be able to prove that Luis committed the crime with which she has been charged. But then again, she may be innocent, which is exactly why the Sixth Amendment right to counsel is so important. (Photo: Stefano Cislaghi / Flickr / CC BY-NC-ND 2.0)

On Wednesday, the Supreme Court delivered a win for the Sixth Amendment right to counsel in Luis v. United States. Five justices—Justice Stephen Breyer, who wrote a plurality opinion joined by Chief Justice John Roberts and Justices Ruth Bader Ginsburg and Sonia Sotomayor, and Justice Clarence Thomas, who wrote a separate concurring opinion—sided with challenger Luis, concluding that the government cannot freeze her untainted assets and thereby deny her the opportunity to be represented by an attorney of her choosing in the criminal case against her.

In 2012, a grand jury indicted Sila Luis on federal charges stemming from an alleged Medicare fraud scheme. According to the indictment, Luis paid kickbacks and conspired to perpetrate a fraud that resulted in her obtaining nearly $45 million.

By the time Luis was charged, she had already spent most of the money, so prosecutors sought to freeze all of her assets up to $45 million, regardless of whether the money in question was derived from the alleged illegal conduct or “untainted” funds that were legitimately earned or otherwise lawfully obtained. The goal was to ensure that, should she be convicted, those funds would be available for forfeiture in order to pay restitution to victims and other statutory penalties.

Luis sought to unfreeze her untainted assets so that she could use some of the money to hire an attorney of her choosing to represent her in the ongoing criminal case, but the trial judge ruled against her, and the Eleventh Circuit Court of Appeals affirmed that decision.

But the Supreme Court disagreed, holding that the pretrial restraint of Luis’ untainted assets violated her right under the Sixth Amendment, which the Supreme Court has previously held, given that the close working relationship between a client and his or her lawyer and the need for trust encompass the right to hire the counsel of one’s choice (subject to certain reasonable limitations, such as when a lawyer has a conflict of interest).

The crux of the case lies in the distinction between tainted and untainted assets—that is, assets that are traceable to a criminal act as opposed to those that are not. The Supreme Court has long held that tainted assets may be seized before a criminal trial, even if doing so results in a defendant’s inability to afford counsel of his or her choice.

This makes sense. After all, it would be bizarre to hold that a thief who steals a purse with $100 in it has a right to then spend the illicitly obtained money on a lawyer to defend him in the purse-snatching case. Rather, the cash belongs to the owner of the purse, and the thief never had any legitimate claim to it.

Writing for the plurality, Breyer noted that “[t]he property at issue here, however, is not loot, contraband, or otherwise ‘tainted.’” It is, as the government conceded, entirely legitimate and unconnected to the fraud scheme Luis is accused of having perpetrated. Nevertheless, prosecutors wanted to “preserve Luis’ untainted assets so that they will be available to cover the costs of forfeiture and restitution if she is convicted, and if the court later determines that her tainted assets are insufficient or otherwise unavailable.”

While the plurality recognized the legitimacy of the government’s interests and even conceded that it had some statutory support, Breyer concluded that “compared to the right to counsel of choice, these interests would seem to lie somewhat further from the heart of a fair, effective criminal justice system.” And, Breyer noted, the law has tracing rules that permit prosecutors to freeze so-called substitute assets when they can establish that tainted funds have been used to purchase other goods.

The plurality was clearly concerned that if Congress were permitted to freeze untainted assets for this crime, there would be nothing to prevent Congress from doing the same for other crimes; to quote Breyer, there would be “no obvious stopping place.” If this were to happen, then “defendants, rendered indigent, would fall back upon publicly paid counsel, including overworked and underpaid public servants.”

Thomas reached the same conclusion but not for the same reasons. As Thomas noted, “constitutional rights necessarily protect the prerequisites for their exercise.” In his view, the 6th Amendment right “to have the Assistance of Counsel” necessarily “implies the right to use lawfully owned property to pay for an attorney. Otherwise the right to counsel—originally understood to protect only the right to hire counsel of choice—would be meaningless.”

In his dissenting opinion, Justice Anthony Kennedy, joined by Justice Samuel Alito, asserted that the government should be able to restrain any potentially forfeitable property regardless of whether it can be tied to a criminal offense. To do otherwise, he argued, would incentivize criminals to dispose of illicit assets while preserving legitimate funds, safe in the knowledge that these untainted assets could then pay for their legal defense.

This would short-circuit the government’s legitimate goal of safeguarding forfeitable property from dissipation. Moreover, as Justice Elena Kagan noted in her separate dissenting opinion, the plurality has drawn a line in the sand of Sixth Amendment jurisprudence that may be difficult to retrace in future cases.

Ultimately, the government may be able to prove that Luis committed the crime with which she has been charged. But then again, she may be innocent, which is exactly why the Sixth Amendment right to counsel is so important.