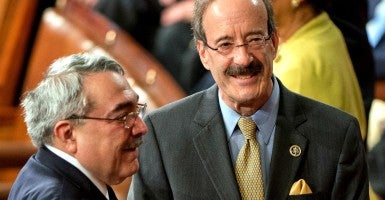 Rep. Eliot Engel, D-N.Y. (right) has written the “Flamethrowers? Really? Act” after learning that the federal government had not yet criminalized flamethrowers. (Photo: AdMedia/Newscom)

He has written the “Flamethrowers? Really? Act” after learning that the federal government had not yet criminalized flamethrowers—it’s named for a television comedy sketch.

While flamethrowers can be dangerous, they are not linked to any actual national interest. The bill would treat flamethrowers the same as machine guns under federal criminal law, imposing penalties of fines and prison terms of up to five, 10, or more years under Chapter 44 of Title 18 of the United States Code. Since there is no national flamethrower problem, but there are some lawful commercial uses, the bill is yet another example of overcriminalization.

The lack of a national flamethrower problem can be seen from the scarcity of flamethrower-related cases within FBI crime data and Department of Justice annual prosecution data. Joshua Prince, an attorney with the Firearms Industry Consulting Group, said there has not been “a documented case of an individual using a flamethrower in commission of a crime.” And that makes sense since flamethrowers aren’t exactly the first choice for someone who wants to rob a bank or steal a car: Pull the trigger, and you burn the cash or blow up the car; get in a shootout, and it might be you who blows up.

If someone were to commit a crime with a flamethrower, there are plenty of federal and state laws that would prohibit and punish all of the harmful conduct that could conceivably result. So there’s no factual or legal need for a federal flamethrower bill. Murder, manslaughter, and arson are prohibited and routinely prosecuted, in virtually every state.

Indeed, they are some of the oldest crimes on the books. Two states regulate flamethrowers directly: Maryland bans them, while California permits them, but “only on film and television sets.” Under the general Tenth Amendment police power, states can and should regulate flamethrowers if there is some compelling reason to do so. But, as it happens, there are also a number of federal criminal and civil rights statutes that could be used, depending on the circumstances, to prosecute someone for unlawful use of a flamethrower.

Although there are few, if any, instances where a flamethrower has been used to commit a crime, according to Prince, they are occasionally used for lawful and beneficial purposes. Roofers, for instance, use them to install rubber roofing, “whereby the flamethrower is utilized to heat the roofing material, until the asphalt melts and interlocks with the roofing surface.” They are used to “ignite controlled burns in relation to sugar cane, bamboo and other similar invasive plants.” And “they have been used by many in rural areas to melt snow, especially after massive snowfalls and to assist emergency responders access locations during massive snowfalls.”

Not only are there lawful, economic uses for flamethrowers and few if any criminal uses, but there are also few incidents of harm associated with flamethrowers and far more lethal things that have yet to be criminalized. “There were zero injuries or deaths from flamethrowers last year in the state of New York”—Engel’s own home state.

It is also a problem to take relatively minor offenses, which are already violations of state law, and to ramp them up into major federal felony offenses. If you don’t think that happens, just ask John Yates or Carol Anne Bond. In 2002, Congress wrote the Sarbanes-Oxley act to prevent corporate wrongdoers from destroying evidence related to a federal investigation.

In 2007, Yates, a Florida fisherman, never would have guessed that he would have to go to the Supreme Court of the United States to avoid a 20-year jail sentence under that law for throwing some fish overboard to avoid being issued a citation.

In 1998, Congress passed the Chemical Weapons Implementation Act to implement the 1993 Chemical Weapons Convention, a treaty banning producing, stockpiling, and using chemical weapons. Carol Anne Bond probably never thought that she would have to explain to the Supreme Court of the United States that she did not violate a chemical weapons treaty by putting caustic chemicals, which resulted in a minor thumb burn, on the car and mailbox of a woman who was having an affair with her husband. In those cases, thankfully, the Supreme Court intervened and concluded that the serious federal offenses with which they were charged did not cover the relatively trivial, albeit wrong, acts that Bond and Yates had committed.

Perhaps Engel just watched too much television and thought the Saturday Night Live comedy skit was funny. But even so, passing more federal criminal laws in the absence of a compelling government need that can end up becoming a trap for the unwary is no joke.

It is a symptom of overcriminalization, which is a serious problem and not a laughing matter.