What Guides the US Intelligence Community 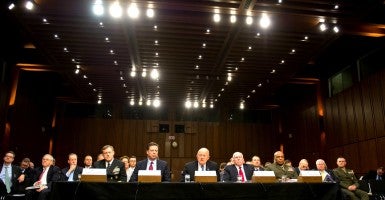 The 2008 amended order defines the roles and responsibilities of the Director of National Intelligence—a position established in the Intelligence Reform and Terrorism Prevention Act of 2004. (Photo: Ron Sachs/CNP / Polaris/Newscom)

For more than 30 years, every president has used Executive Order 12333 to provide both organizational and implementation direction to the intelligence community.

This executive order, which was first signed by President Ronald Reagan in 1981, has directed the intelligence community to collect and provide information to the president using all available legal means under the U.S. Constitution and in accordance with the president’s national security priorities.

The objective of Executive Order 12333, and its various amendments, is to ensure that the president and the cabinet members with national security responsibilities are provided with information obtained by the intelligence agencies.

That same information is to enable the “development and conduct of foreign, defense, and economic policies, and the protection of the United States national interest from foreign security threats.”

Executive Order 12333 is an organizational and procedural document, not an authorities document. For example, many of the complementary authorities to collect intelligence inside the United States are captured in the Foreign Intelligence Surveillance Act as amended.

Part III outlines general provisions to include the explicit requirement that the intelligence community leadership “cooperate with the Congress in the conduct of its responsibilities for oversight of intelligence activities[.]”

In July 2008, President George W. Bush approved the most sweeping modifications to Executive Order 12333 to ensure that it would be aligned to the enactment of the Intelligence Reform and Terrorism Prevention Act of 2004 (IRTPA).

Notwithstanding those revisions in 2008 to incorporate the roles and responsibilities for the Director of National Intelligence (DNI), the revised order reinforced the overall framework for the activities of America’s intelligence professionals along with specific direction and rules for the governance for the intelligence community and its individual component parts.

The 2008 amended order defines the roles and responsibilities of the director of national intelligence—a position established in the Intelligence Reform and Terrorism Prevention Act of 2004—and specifically emphasizes the need for intelligence sharing and intelligence community collaboration as it pertains to collection, dissemination, and analysis.

The revised Executive Order 12333 renewed the direction to intelligence community personnel that they must conduct all intelligence activities in manner that protects the civil liberties and privacy of all U.S. persons, regardless of their location overseas or within the United States.

The order makes the attorney general responsible to review and approve the procedures for obtaining and handling intelligence collection inside the United States.

Notwithstanding the revisions to Executive Order 12333, the order does not authorize the intelligence community to undertake electronic surveillance against U.S. persons, who, by definition, come under the protection of the U.S. Constitution and the Fourth Amendment in particular.

If there is a national security predicate to collect against a U.S. person, stringent collection approvals and oversight apply. The order calls for the “least intrusive collection techniques feasible within the United States or directed against United States persons abroad.”

American intelligence is not authorized to apply “electronic surveillance, unconsented physical searches, mail surveillance, physical surveillance, or monitoring devices” unless approved by the head of an agency requesting the coverage as well as the attorney general.