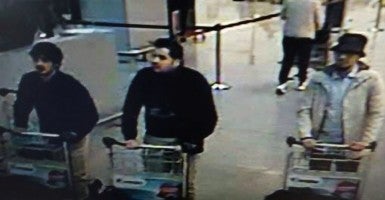 The three men suspected of being behind the attacks at Brussels airport. (Photo: Splash News/Newscom)

Two of the terrorists responsible for the bombings in Brussels have been linked to a possible plot on nuclear facilities uncovered by Belgian security back in February. Police found hours of video footage tracking a senior nuclear scientist, causing heightened security over the past several weeks at two nuclear power plants and evacuation of non-essential staff after this week’s bombings.

According to Interior Minister Jan Jambon after the February discovery, there was a threat:

to the person in question, but not the nuclear facilities…To date, we have no indication that there is a specific threat to the Belgian nuclear sites. The nuclear industry is one of the best protected areas.

This is especially so in the United States. Nuclear power plants in America are safe and have adapted to every changing security threats, whether in the wake of Sept. 11th, 2001 or ever-present cybersecurity issues. According to the U.S. Nuclear Regulatory Commission, “they are among the best-protected sector of our national infrastructure.”

In addition to regulation and inspection by the Nuclear Regulatory Commission, the nuclear industry also self-regulates and shares best practices through the Institute of Nuclear Power Operations.

Nuclear power plants regularly engage in mock force-on-force assaults to train and hone security officers to protect essential components of nuclear plants and public safety. According to the Nuclear Regulatory Commission, these exercises “ include an assault by one or more determined and capable adversary forces attacking by land or water, truck bombs, boat bombs, insider threats and cyber attacks.”

All nuclear plant employees also undergo background checks in cooperation with the federal Terrorist Screening Center and plants are required to have secure screened access to facilities.

Moving forward, the U.S. must take steps to learn from Europe’s security mistakes. But Americans should be assured that nuclear power plants have and continue to do their due diligence to protect facilities and the public.