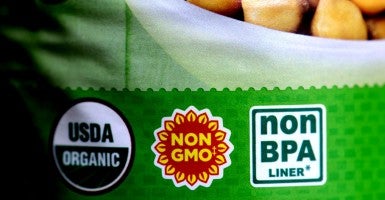 They don’t support labeling due to consumer choice, but instead because they don’t want there to be genetically engineered food. (Photo: Alex Milan Tracy/Sipa USA/Newscom)

Recently the Senate failed to pass legislation that would effectively mandate the labeling of genetically engineered food. That’s a good thing.

The Senate labeling bill that was voted out of the Senate Agriculture Committee prohibited states from imposing mandatory labeling requirements, while not creating any type of federal requirement. This is what the House bill that passed last year did as well.

Then, last week, a new version of the Senate bill was considered on the floor that was different from what was reported out of the Senate Agriculture Committee. It would have imposed a federal mandatory labeling requirement unless a forced “voluntary” requirement was met (70 percent of labeled food had to be voluntarily labeled within 2 years after the USDA developed regulations clarifying the process). In both instances, the federal government would have been forcing food companies to label whether food had been genetically engineered.

This entire legislative effort is being driven by Vermont, which passed a state labeling law that will go into effect this summer. Food companies are concerned they will have to start meeting the state’s labeling requirements and claim they will be forced to apply the Vermont standards to all of their products nationwide. While by no means suggesting it would be the easiest option, companies should instead consider ending sales to Vermont, and make this known right away so it can “wake up” in-state retailers and state officials about the harm the state is about to create.

What about consumer choice, though?

The consumer choice argument is flimsy (even unrelated to the lack of scientific support) because it isn’t clear what information a consumer doesn’t have now to make an informed decision. For example, since some consumers want to buy only food that’s gluten-free, should any food product that isn’t gluten-free be labeled as non-gluten-free? Of course not, because consumers know that if it doesn’t say gluten-free, it probably isn’t. Silence does say something to consumers.

There’s also the pesky problem regarding the science: There’s no scientific justification for labeling.

Major scientific organizations from the World Health Organization to the National Academy of Science agree that genetically engineered foods for sale are safe. This rush to address labeling shouldn’t be a justification for developing extremely damaging policy that is inconsistent with science and could create serious harm for the development of bioengineered food.

Some consumers may want to mandate labeling despite the science, but compelling companies to disclose such information without any scientific basis would be inappropriate (and a gross abuse of governmental power) and very well could violate the First Amendment.