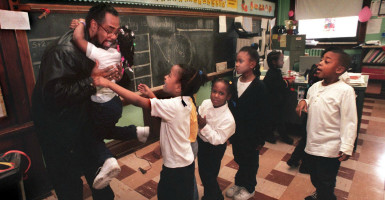 Students who participated in a school choice program in Milwaukee were much less likely to face criminal charges or convictions than their counterparts in public schools, according to a new study.

The study of 1,089 students in the voucher program, released earlier this month and conducted by University of Arkansas doctoral student Corey DeAngelis and education policy professor Patrick Wolf, also found for males who participated:

“The voucher is a symbolic ‘get out of jail free’ card for students,” DeAngelis, the doctoral student, told The Daily Signal in a phone interview. “There’s a monopoly on public funds because 100 percent of [the] public finance monopoly.”

Vouchers, DeAngelis said, allow parents to take their tax dollars with them to fund the education of their choice for their children. He said vouchers provide an alternative to public schools with traditional tax financing.

“With the option of attending private schools with vouchers, parents see their children moving forward and having positive outcomes. This leads to a brighter and more prosperous future,” Virginia Walden Ford, executive director of D.C. Parents for School Choice Inc., and a visiting fellow at The Heritage Foundation, wrote in a 2014 article for The Daily Signal.

DeAngelis said the high quality of education available through school choice could be responsible for reducing students’ likelihood of being accused and convicted of crimes.

“A higher quality of education leads to better citizens,” he said, “citizens who are less likely to commit crimes.”

Jim Bender, president of School Choice Wisconsin, cautioned against looking at one “data point” to justify any education program.

“There are many different data points and factors that go into education as a success,” he told The Daily Signal in a phone interview.

“The study’s biggest impact is a robust discussion,” he said. “What is the role of public dollars in education?”

Bender said he expects more studies on the same set of Milwaukee students. Planned studies will evaluate the effect of Milwaukee’s school choice program on students’ marriages, childbirth, and public resource use, among other topics, he said.

The study evaluated 2,178 students, comparing 1,089 students in the voucher program to 1,089 students in traditional public schools in 2006. The two sets of students were matched based on grade, neighborhood, race, gender, English skills, and math and reading test scores.

The study collected information on criminal activity from the Wisconsin court system by searching for cases using a student’s first name, last name, and date of birth.