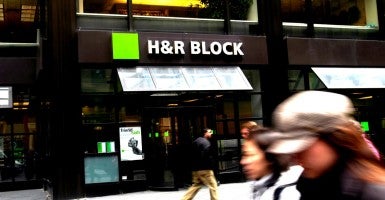 Large companies can afford to comply with expensive regulations. Many of their small-business competitors cannot. (Photo: Richard B. Levine/Newscom)

H&R Block seems to be trying to do the same thing to the tax preparation industry. Legally, anyone can prepare his own taxes. Anyone can also prepare someone else’s taxes for him. Approximately 350,000 independent tax preparers do exactly that.

H&R Block argues that these regulations would protect taxpayers from scam artists and fraud. But these are fairly small problems. Out of the tens of millions of tax returns filed each year, the IRS brings charges against only a few hundred.

Moreover, the government has less intrusive ways to protect against scams. The IRS, for example, maintains a directory of highly qualified tax preparers. Anyone worried about being scammed can use one of these certified preparers. This fixes the problems H&R Block has raised without eliminating competition from small businesses.

That is not enough for H&R Block. It wants expensive licensing imposed on all tax preparers. If passed, these regulations would drive many independent tax preparers out of business.

One of these independent tax preparers, Sabina Loving, spoke at The Heritage Foundation last year. Loving is a single mother from the South Side of Chicago who wanted to work for herself. She felt that the big tax preparation firms were taking advantage of many of her neighbors—charging hundreds of dollars to prepare a return. So she opened up her own firm that focused on providing low-cost tax preparation in her community.

If Congress licenses tax preparers, the expense will drive Loving out of business. Her clients will have to pay more to a large tax preparation firm.

H&R block has no problem with that. Congress should.