Former Muslim: It’s Not ‘Islamophobic’ to ‘Discuss Islam as a Set of Ideas’ 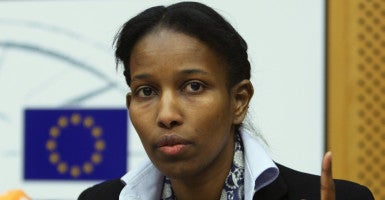 “We the people have to educate ourselves on exactly what the threat is,” Ayaan Hirsi Ali, a human rights activist, said. (Photo: Francois Lenoir/Reuters /Newscom)

“To discuss Islam as a set of ideas does not make you a racist. It doesn’t make you Islamophobic,” Ali said to cheers Friday at the annual Conservative Political Action Conference, or CPAC. “If we want to name the enemy and understand the threat, then … we the people have to educate ourselves on exactly what the threat is.”

The Somalia-born Ali, who renounced her Muslim faith, became an atheist, and gained political office in the Netherlands, said it is important for Americans to understand that Muhammad, the prophet of Islam, established Islam as both a religion and a political doctrine.

When Muhammad founded Islam in Mecca, leading to the birth of the Quran, Ali said, he did so with religious intentions. But when he moved to Medina and developed a constitution, she said, it was for political motivations.

“That doctrine of Muhammad’s in Medina is the antithesis of the idea of America, the American philosophy, and American political theory,” she said, adding:

Not every single Muslim is a threat—millions and millions and millions of Muslims are peace-loving. But those Muslims who invoke the Prophet Muhammad in his legacy in Medina and in his creeds, those are the threat to us on a personal level—as a woman, as those who refuse to be the way they want you to be, as Muslims who refuse to emulate Muhammad, as citizens of the world.

Ali, a naturalized U.S. citizen and author of the book “Heretic: Why Islam Needs a Reformation Now,” warned against labeling radical Islamic terrorists “lone wolves,” instead calling them state actors who organize internationally.

While Ali said her intelligence is insulted when American leaders tell her that Islam is a religion of peace, she stressed the importance of recognizing that not all Muslims are jihadists.

“I don’t think there are people more desperate for peace today than those who identify as Muslim,” Ali said.