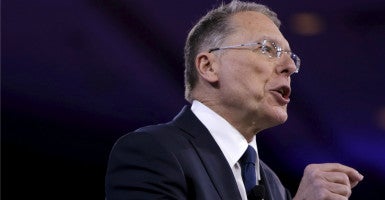 Wayne LaPierre, executive vice president and CEO of the National Rifle Association, called out President Barack Obama for dodging his invitation to debate gun rights, saying what the president knows about guns “wouldn’t fill a thimble.”

“We know a liar when we see one. We also know a political coward when we see one,” LaPierre said Thursday before a packed auditorium at the 2016 Conservative Political Action Conference, or CPAC, just outside Washington, D.C.

The Obama administration criticized the NRA in January for skipping a gun control discussion hosted three miles from the gun rights organization’s headquarters. The live town hall, hosted by CNN, served as a platform for the president to garner public support for his executive actions on gun control.

LaPierre challenged Obama a week later to debate him on firearms with “no pre-screened questions and no gas bag answers.”

At CPAC, he said the president still had not responded to his invitation, and he reissued the offer:

He’ll keep hiding behind his podium and rigged appearances like all the other truth-dodging politicians, and then he’ll lecture us on what’s wrong with our rights, while day by day, all over this country, more and more people grow more and more disgusted, enraged, and determined to just throw them all out.

The NRA executive said the president was dodging a one-on-one debate to hide from the “simple truth” that another gun law isn’t going to prevent crimes committed with firearms.

Throughout the past year, he said, over 400 persons in Chicago have been shot—a 100-percent increase from the city’s homicide rate at this time last year:

President Obama, you know, he brags about what he accomplishes with a pen and a phone. But he refuses, he refuses to pick up either and order his U.S. attorneys to flip Chicago upside down and prosecute every drug dealer with a gun, gang member with a gun, violent felon with a gun to the fullest extent of the existing federal gun laws.

If he did that, that would save lives. That would make Chicago safer, but he won’t do that. That doesn’t fit his political agenda to attack the NRA, propel Hillary Clinton into the White House, and to destroy our personal freedom forever.

At the beginning of the year, Obama issued executive actions expanding background checks for firearms sales and said the government would spend more on mental health care to try to reduce gun-related bloodshed.

LaPierre argued that the gun restrictions would capture only law-abiding citizens, while criminals would slip through the tighter requirements.

Running through Saturday, CPAC offers conservatives across the country an opportunity to gather with fellow activists and leaders for speeches, panels, exhibits, and other activities at Gaylord National Resort and Convention Center at Maryland’s National Harbor.