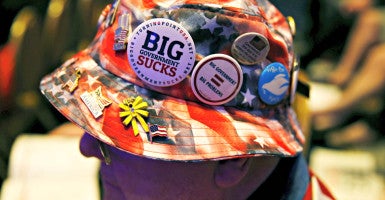 The buttons and pins on this man's hat Thursday at CPAC say a little about what he thinks of big government. (Photo: Gary Cameron/Reuters/Newscom)

A critical turning point came when President Teddy Roosevelt established the Food Safety and Inspection Service, he says. The agency, now a division of the U.S. Department of Agriculture, draws its authority from the Pure Food and Drug Act signed into law by Roosevelt in 1906.

Salatin describes the Republican president as a “socialist” who did great damage to the free enterprise system.

Who is Joel Salatin?

He introduced himself Thursday at the Conservative Political Action Conference as a “Christian, libertarian, environmentalist, capitalist lunatic.”

So he said in prepared remarks delivered during an afternoon panel entitled “Saving America’s Property Rights and Family Farmers.”

With an eye toward history, Salatin points the finger at Roosevelt and other progressive political figures who unleashed the power of government on entrepreneurs.

“If the government never told us how to farm and to eat, we would be a healthier society,” he said.

Salatin agreed that Americans have legitimate concerns about pollution and irresponsible industry actions.

“Yes, we should stand up to radical environmentalists,” he said. “But we can’t just be the party of no. We need to focus on real solutions, and that means creating more opportunities for entrepreneurs.”

The “libertarian environmentalist” was joined by Martha Boneta, who increasingly needs no introduction to conservative audiences.

As The Daily Signal has reported extensively since 2014, Boneta is embroiled in a legal dispute with the Piedmont Environmental Council over the terms of a conservation easement on her 64-acre Liberty Farm in Paris, Va., which is part of Fauquier County.

“Never give up on the American dream,” Boneta told the audience. “The power of just one person and one idea can create a movement.”

The Piedmont Environmental Council is a nonprofit land trust headquartered in Fauquier County that, along with the Virginia Outdoors Foundation, holds the easement on Boneta’s property.

>>> Green Group Under Scrutiny for Trespassing on Woman’s Farm

Conservation easements are legal agreements that typically call upon property owners to set aside a portion of their land for conservation purposes in exchange for tax breaks.

The idea is to preserve historic and bucolic regions for posterity while providing landowners with the latitude to conduct commercial and light industrial activities.

In Boneta’s case, however, the Virginia Outdoors Foundation identified “serious flaws” in the easement that it says are in need of “corrective amendments.” In addition, two versions of the easement exist: one signed by Boneta and another unsigned but filed in county records.

The panel discussion at the Conservative Political Action Conference, or CPAC, was preceded by a documentary on the Boneta case entitled “Farming in Fear.”

Boneta filed a lawsuit in Fauquier County Circuit Court against the Piedmont Environmental Council and the husband-wife real estate team of Phillip and Patricia Thomas, both members of the land trust.

The Thomases filed a motion to dismiss Boneta’s lawsuit. But in January, Circuit Court Judge Jeffrey Parker rejected the motion and ruled that Boneta had presented ample evidence for her case to proceed with a trial by jury, expected later this year.

At CPAC, Boneta credited average citizens for taking a principled stand against well connected, well funded environmental activists and their allies in government.

But she also cautioned that “the battle was not over” and that government regulations continue to work against farmers and other entrepreneurs.

In response to a question from The Daily Signal about the impact of a recent decision by the Virginia Supreme Court that disputes over conservative easements must be settled in deference to property owners, Boneta and Salatin both said they took heart.

Where the language of a particular easement is not clear or ambiguous, Virginia’s highest court ruled, the burden of proof must be on the land trust and not the property owner.

“This is huge,” Boneta said. “This means a lot for the free use of land.”