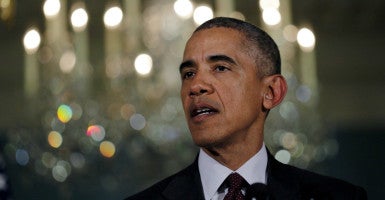 That’s what Deneen Borelli, chief political correspondent for the Conservative Review, told hundreds of conservative activists during a panel discussion this morning at the annual CPAC conference just outside Washington, D.C.

Although a neighbor observed suspicious activities by the couple and visitors to their home, the neighbor was “afraid of being called a racist” and declined to speak out, Borelli told the audience at the Conservative Political Action Conference, or CPAC.

Syed Rizwan Farook and Tashfeen Malik, who lived in the town of Redlands, were killed in a shootout with police officers after their attack on a holiday party for employees with the San Bernardino County Department of Public Health, where Farook worked.

The attack may not have taken place in the first place, Borelli suggested, if concerned citizens had not succumbed to political correctness.

“I’m tired of the race card being played,” she said.

The CPAC panel, entitled “Greatest National Security Challenge Facing the Next President,” took a hard look at how the policies of President Barack Obama undermined America’s economic posture at home and how domestic failures contributed to the nation’s inability to confront external threats and project power abroad.

Borelli quoted Abraham Lincoln and Ronald Reagan, both presidents who warned that America more likely would be destroyed from within than without.

Reagan said: “Freedom is never more than one generation away from extinction. We didn’t pass it to our children in the bloodstream. It must be fought for, protected, and handed on for them to do the same, or one day we will spend our sunset years telling our children and our children’s children what it was once like in the United States where men were free.”

Rep. Ryan Zinke, R-Mont., warned that America’s retreat from the world has “created a vacuum” that is being filled by China in the Asian-Pacific region and by Russia in the Middle East.

Zinke said the Obama administration’s nuclear deal with Iran puts the terrorist state in a stronger position to develop intercontinental ballistic missiles that could be equipped with nuclear weapons.

As a result of Obama’s policies, “our enemies don’t fear us, and our allies don’t trust us,” Zinke said.

James Carafano, a top national security and foreign policy analyst with The Heritage Foundation, said Obama’s policies are “tailor-made” to play into the hands of America’s worst enemies.

“The goal of our enemies is to win without fighting and to incrementally walk us away [from areas of influence],” Carafano said.

Carafano cited Heritage’s Index of Economic Freedom, which has the U.S. experiencing a precipitous drop in its ranking during the Obama years.

Running through Saturday, CPAC offers conservatives across the country an opportunity to gather with fellow activists and leaders for speeches, panels, exhibits, and other activities at Gaylord National Resort and Convention Center, just outside Washington, D.C., at Maryland’s National Harbor.