The World Isn’t Safer. So Why Has the National Security Budget Decreased By 15%? 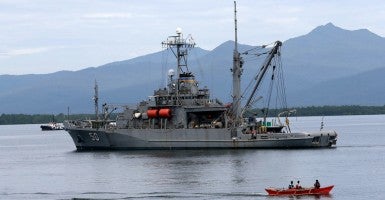 No one would argue threats to America have decreased by 15 percent since 2011. So why has the budget for protecting ourselves decreased by that much?

This all started in August 2011, when Congress passed and President Obama signed into law the Budget Control Act and Americans first started hearing the word ‘sequester.’

Republicans had taken control of the House of Representatives in January, and the Obama administration had been using “extraordinary measures” to extend the federal debt ceiling. The economy was struggling, with unemployment of more than 9 percent, and the government was on pace to incur a federal deficit of more than $1 trillion for the third consecutive year.

At the same time, threats around the world appeared to be calming. Osama bin Laden had been killed by Navy SEALS in May, the Arab Spring had led to regime change in Tunisia and Egypt, the U.S. was withdrawing from Iraq and the administration was “leading from behind” in what seemed at the time to be a successful intervention in Libya. Most Americans, and most of our allies around the world, were far more concerned about domestic economic issues and national debt than foreign policy and national security.

But even in 2011, it was clear to some the potential cuts to national security spending the Budget Control Act would trigger were unacceptable. The day after it became law, Secretary of Defense Leon Panetta said,

The debt ceiling agreement contains a sequester mechanism that would take effect if Congress fails to enact further deficit reduction. If that happens, it could trigger a round of dangerous across-the-board defense cuts that would do real damage to our security, our troops and their families, and our ability to protect the nation.

At the same time, the situation in the world has turned dramatically for the worse. Here are just a few of the important world events since 2011:

The security threats facing the United States and our allies continue to grow. Vladimir Putin’s Russia continues to intervene militarily in Ukraine and cause instability in Eastern Europe. China continues to make provocative territorial claims in Asia. Islamic terrorists continue to plot against the United States and other Western countries. Iran continues to support terrorist groups and act aggressively in places such as Yemen even as it negotiates a potential nuclear agreement with the U.S. And the threat of cyber attacks only continues to grow.

There is a clear and painful disconnect between what is happening around the world and what is happening in Washington. The world is growing more dangerous, but the government continues to erode America’s national security.

The world has not gotten safer since 2011, so why is the U.S. cutting our national security budget by 15 percent? These budget cuts are one part of why The Heritage Foundation’s 2015 Index of U.S. Military Strength assessed that our military power is marginal. Instead of cutting, we should be investing responsibly in protecting our nation and our interests without raising taxes or increasing the deficit.

The debate over national security funding in Washington cannot continue to occur in a vacuum. The world has grown markedly more dangerous since 2011, and the United States should be increasing our national security budget, not slashing it.