Zika Virus Is Serious (But It’s Not Another Ebola) 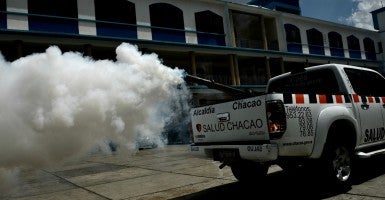 A Health Ministry car in Venezuela fumigates mosquitos at a primary school in Caracas on Feb. 5, 2016. (Photo:Carlos Becerra/Polaris/Newscom)

Let’s get some facts on the table, then discuss how we should go forward.

First, Zika is a part of a family of viruses called Flavivirues. These started in Africa and have resulted in outbreaks in French Polynesia in 2013 and, most recently, a significant spread in Latin America.

Unlike Ebola (a much more serious affliction), Zika is spread primarily by mosquito bites. The insect bites a person carrying the virus, picks it up as it feeds on his blood, and spreads it to the next person it bites. Thus far, there is no evidence that Zika can be spread by normal human-to-human contact (as Ebola can be). As late as the 4th of February, the CDC has concluded that it has a proven case of human-to-human transmission through sexual contact.

For the vast majority of people who contract Zika, the symptoms are very mild—so much so that four out of five will not even realize they are sick. The symptoms are low-grade fever, maybe a rash, possible conjunctivitis (pinkeye), and some joint pain.

Does any of that sound familiar? Those are the symptoms of any number of ailments. So it is crucial that when making any determination to go to the doctor, you share your travel and exposure history. According to principal deputy director of the CDC, Dr. Schuchat, most people clear the virus from their bloodstreams within about a week.

Even if you catch Zika, the effects on you are mild and will go away relatively quickly, with no ill effects.

So why is everyone concerned, and why has the World Heath Organization labeled it a Public Health Emergency of International Concern? This is because the true brunt of the disease falls on the unborn and newborn.

The data being collected in Brazil right now shows fairly convincingly that if a pregnant woman contracts Zika, there is a significantly higher chance her child will be born with a birth defect called microcephaly. This literally means “small head,” as the child’s head will be abnormally small, possibly due to the brain not developing properly in the womb.

Microcephaly can be caused by other things (drugs, alcohol, chromosomal abnormalities), but the significant jump in cases in Brazil has coincided with the major outbreak there. From 2010 to 2014, there were 156 cases of microcephaly, but from October 2015 to January 2016, they have had between 3,500 and 4,000 cases. Research continues, but the world’s public health experts are moving forward.

An additional threat is that Zika could also cause a condition known as a Guillian-Barre syndrome. The Zika outbreak in French Polynesia saw this as a major result. This is a neurological disorder in which the body’s immune system attacks its own nerves. The result is tingling in the hands and feet, muscle weakness, and possible temporary paralysis. Patients generally recover, but it can be fatal in rare cases.

As yet, there is no vaccine or cure for Zika. Therefore, one must take precautions.

Ideally, do not travel to Latin America or the Caribbean if you are pregnant or planning to become pregnant. For anyone traveling in these areas that have active Zika transmission ongoing, strict anti-mosquito protocols should be followed. These include but are not limited to wearing long-sleeved clothing; treating clothing, tents, and other gear with high-grade repellents; and using active-agent repellents such as Deet.

If you have traveled in these regions and are pregnant, you should check in with your OB/GYN provider and discuss the best course of action as far a testing for Zika. Also, this will allow him to be on the look out for any issues with your child. If you have been exposed, given the new discovery that Zika can be spread through sexual contact, use of a condom is recommended until it is clear that you are not carrying the virus.

The bottom line is that this is not a disease that will kill lots of people. The danger lies on the most vulnerable of our population. Several countries are already advising women to wait to get pregnant for several years, when the threat can be lessened or a cure found.

For Americans, caution in travel plans, rigorous precautions while traveling, and follow-up if you have doubts if you have been exposed should keep us safe. All that doubles for women of childbearing age and their partners.

The good news is that the early designation by World Health Organization and the accelerated research it is spawning will help address this problem effectively. This is serious and is being taken seriously but, thank God, is not another Ebola.