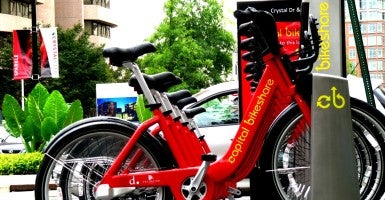 Showering federal money on the latest fashionable project is second nature for some members of Congress. The newest example comes with a program that looks to classify bikeshare programs as public transit.

The Bikeshare Transit Act, introduced by Reps. Earl Blumenauer, D-Ore., and Vern Buchanan, R-Fla., would make bike sharing programs eligible for continuous funding out of the transit account of the Highway Trust Fund, providing these programs with a permanent federal funding stream.

The expansion of federal funding into local matters is not unprecedented.

For all of bikesharing’s potential merits, taxpayers should be very wary of extending federal funding to yet another inherently local activity

For all of bikesharing’s potential merits, taxpayers should be very wary of extending federal funding to yet another inherently local activity—especially with a national debt now over $19 trillion.

While bikeshare can be a fun, healthy, and quick way to get around, its status as a veritable, cost-effective transportation service that requires federal tax dollars over local sponsorship deserves real scrutiny.

The Problems With Publicly Subsidized Bikesharing

Take, for instance, Washington, D.C.’s Capital Bikeshare, which is the largest public bikesharing program in the country. Capital Bikeshare has over 350 stations primarily in D.C., but also in neighboring Maryland and Virginia. It has received multiple federal grants, including a $6.4 million starter grant, as well as continuous funding from local governments.

Capital Bikeshare riders traversed over 6.4 million miles in 2014—a blip compared to the nearly 2 billion passenger-miles traveled on D.C.’s rail and bus transit services. This huge disparity calls into question bikeshare’s value as a real mode of transit versus a desirable amenity.

And what about cost? Within its primary market of D.C., Capital Bikeshare covers only 70 percent of its operating costs, meaning it loses 30 cents on the dollar. While this may be a high ratio for transit services (which is not saying much), D.C.’s Capital Bikeshare lost $1.7 million on 2014 operations.

The bottom line is that D.C. taxpayers must fork over 65 cents every time someone hops on a Bikeshare bike. However, the real costs are actually much greater: Operating costs do not include the capital expenses of the bikes themselves, nor the expensive station docks.

This means that Capital Bikeshare would never be able to cover its full costs without drastically increasing rider fees.

Yet even its operating costs do not compare favorably to existing modes of transit. Bikeshare’s operating costs per passenger-mile exceed those of D.C. Metrorail by some 55 percent (although they are not as high as Metrobus’).

This is surprising, because D.C. transit’s operating costs are dominated by personnel expenses that account for roughly two-thirds of its operating costs. Yet for Bikeshare, the passengers themselves—rather than heavily unionized government employees—operate the vehicles, while station docks are not continuously staffed.

Because employees’ primary jobs are to repair and reshuffle bikes across the system, expanding Bikeshare using federal money would undoubtedly increase these costs.

These cost metrics are important because a continuous stream of federal funding provides entities with little incentive to control operating costs. “Free money” from the federal government would lead only to permanent dependency on federal funding and the corresponding reduction in responsiveness and service that comes with it. This draws a sharp contrast to having the parties that benefit from bikeshare bear the costs of the system.

Then there’s the issue of who would actually gain from more taxpayer subsidies going to bikesharing. In Capital Bikeshare’s case, the answer is affluent white professionals. Capital Bikeshare’s own survey found that the average household income of its member in D.C. was $100,000 in 2014, well above the median of $66,000 for D.C. as a whole.

This racial and income disparity exists across most of the nation’s major bikesharing programs. Rather than subsidize a hipster nicety, wouldn’t it make more sense to prioritize mobility for low-income households, who overwhelmingly rely on cars and bus service?

The point here is not that bikesharing programs are inherently bad and should not exist. Rather, there is not a compelling reason why the federal government should be involved in funding them at all. Indeed, given mass transit’s poor performance across the country—in part caused by federal subsidies—why would bikeshare proponents want to emulate that model?

Even more ironically, putting bikesharing on the federal dole will make riders dependent on the gas tax, placing car-averse cyclists and smart-growthers in the awkward position of needing more gas-guzzlers on the road to pay for their bikesharing systems.

Instead, why not emulate New York City’s Citi bike program, which is funded by private capital and sponsorships? Alternatively, local businesses and developers could band together and cover the costs of bikeshare systems that make their location more attractive.

For environmentally minded urbanists, a local, market-based approach seems far more desirable than lining up at the trough of gasoline money funneled through the federal labyrinth.