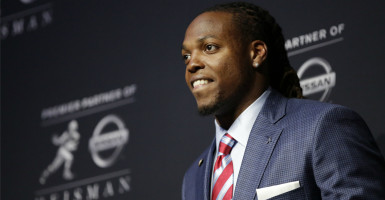 Rep. Robert Aderholt, R-Ala., co-chairing the event this year with Rep. Juan Vargas, D-Calif., made the announcement Monday that 21-year-old Henry will give the prayer.

“I’m pleased we were able to have this talented young man of faith give our closing prayer,” Aderholt said in a statement provided to The Daily Signal.

The National Prayer Breakfast, a bipartisan event, is traditionally held the first Thursday of February at the Washington Hilton to come together for fellowship, prayer, and thanksgiving.

The tradition has been kept ever since, with members of prayer groups in the U.S. Senate and House alternating as hosts and directors of the event. This year, it is expected that more than 3,500 people will attend, Alabama Media Group’s AL.com reported.

At the breakfast, generally, the U.S. president speaks, as well as a keynote speaker (whose name is kept confidential until the morning of). Past speakers have included Mother Teresa and retired neurosurgeon Dr. Ben Carson.

Here are 17 facts about the young man giving the closing prayer, Derrick Henry:

3. Henry was awarded the 2015 Heisman Trophy for being the most outstanding college football player.

4. “First off, I just want to thank God for bringing me here and winning this prestigious award. He’s been so good to me in my life, and I’ve been honored and blessed with this opportunity,” Henry said while accepting the Heisman award.

5. During his speech, he gave the following advice to kids:

God is everything. Always keep God first. Always pray. Don’t be afraid to pray; he’ll always hear your cry. If you have dreams, go chase ’em. If you believe it, you can achieve it. God will be there every step of the way. I’m a living testament, man. … I never thought I’d be up here, but, you know, God is good. I get on my hands and knees every night and pray. I’m thankful for everything. Keep God first, always pray, and you’ll always chase your dream.

6. He has also received the Maxwell Award and Doak Walker Award for best player and best running back in college football.

7. Henry set the Alabama career rushing record, as well as a Southeastern Conference (SEC) single-season record, with rushing 2,219 yards and 28 touchdowns on 395 carries this season.

8. Instead of staying at Alabama to play his senior season, Henry announced in January that he is entering the 2016 NFL draft. He is currently preparing for the April draft.

9. Henry has said he would like to be picked by the Dallas Cowboys, according to NFL College Football 24/7. It has been reported that the Minnesota Vikings may pick him.

10. He is from the small town of Yulee in northeastern Florida.

11. Back in the day, Henry set football records at Yulee High School. He was named first-team All Coast winner in his sophomore and junior years and as a senior was named the National High School Player of the Year. In 2012, he broke a 51-year national high school career rushing yards record.

12. He tweets about his faith…

Wake up thank the Lord & ask him for guidance . #Everyday

13. …and everyone that supports him:

Nothing , but God , Coaches , & my teammates they deserve all the credit . To all the fans thanks for the love & support . #RollTide

15. Henry’s grandmother Gladys, who helped raise him, nicknamed him “Shocker,” as his parents were teenagers when he was born.

16. Henry’s family gathered in the hospital (where 81-year-old Gladys was located because of health complications) to watch Henry be named the Heisman Trophy winner. “Without her, I wouldn’t be who I am today,” Henry said during ESPN’s broadcast of the Heisman ceremony.

17. He even has a tattoo of his grandmother’s name on his chest. “She’s taught me a lot, and she’s still teaching me. Just always keep my head on straight, stay humble and keep God first,” Henry said of his grandmother, reported ESPN.