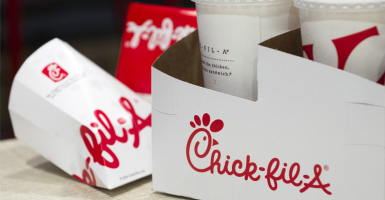 A man's Facebook post about what he and his daughter saw at Chick-fil-A has gone viral. (Photo: Stringer/ReutersNewscom)

A Tennessee father is crediting Chick-fil-A with helping teach his daughter “life lessons” in his viral Facebook post about a store manager’s kindness toward a man in need.

“I love teaching my daughter life lessons, and I also love being there to watch other Christians teach her life lessons. Thank you, Chick-fil-A, for taking care of the latter today,” wrote Joey Mustain in a post that has been shared over 43,000 times as of Jan. 26.

I took Stella to Chick-fil-A today. It’s our normal daddy/daughter spot. It’s clean, so good, and the playground has a…

Mustain said in the post that he was eating at a Chick-fil-A with his daughter Stella when a “homeless traveler” walked in to see if the store could spare “any extra food.” Though “people near him kept their distance,” Mustain said the man was kind and conversational as he waited to speak with the store manager.

Mustain said he and his daughter then witnessed what he described as a “beautiful scene” between the two men, who have yet to be identified.

“All I could pick up on of the conversation was the manager saying that he’d love to give him a full, warm meal—not just scraps or extras—, and the only thing he required was that the man let him pray with him,” wrote Mustain in the Facebook post.

After agreeing to this request, Mustain said “the manager stopped then and there, laid his hand on the man, and proceeded to pray.”

Mustain includes a picture in the post, in which the two men appear to bow their heads together.

“I heard love in that prayer. The homeless man wasn’t some untouchable stain on business. He was the reason that store opened its doors this morning (or any morning),” wrote Mustain.

After explaining to his daughter what was happening, Mustain said “she bowed her head, too.”

“I realized then and there that Chick-fil-A doesn’t simply do business for profits, they truly use business to minister. In a time when companies are trying to win in the market by neutralizing any possibility of offense, CFA is thriving because they unwaveringly cling to their principles and purpose,” said Mustain.

Mustain told The Daily Signal he hopes the attention from the Facebook post will help “bless” Chick-fil-A’s business.

According to its corporate website, the fast food chain’s purpose is “to glorify God by being a faithful steward of all that is entrusted to us and to have a positive influence on all who come into contact with Chick-fil-A.”

The Chick-fil-A website further claims everyone who works at the company is taught to treat “every person who comes through our doors with honor, dignity, and respect.”