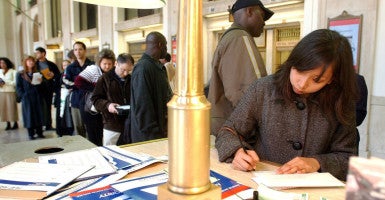 Consumers who filed electronically with the IRS rated their experience a 76, while those who filed on paper put it at 20 points lower. (Photo: Justin Lane/EPA/Newscom)

Consumers increasingly are dissatisfied with U.S. government services, according to a report released Tuesday by the American Customer Satisfaction Index.

Scoring 63.9 on a scale of 0 to 100, satisfaction with federal government services declined for the third year in a row, dropping 0.8 percent from last year’s score of 64.4, the report says.

The Department of the Treasury scored lowest among federal departments, receiving a 55 from consumers.

However, the Department of the Interior scored 11 points higher than the federal average with 75—the highest score among individual departments.

“Deteriorating customer satisfaction was widespread in 2015, and the slump in citizen satisfaction is similar to what we observe in the private sector among voters in the political arena,” Claes Fornell, chairman and founder of the American Customer Satisfaction Index, said in a formal statement.

“But if the small gains in the drivers of citizen satisfaction take hold or continue to rise, we might finally see a bit of a turnaround.”

The highest level of satisfaction with government services during President Obama’s two terms was 68.7 in 2009, his first year, just below the score of 68.9 in 2008, the last year of President George W. Bush’s two terms. The new score of 63.9 is the lowest of the Obama years.

Salim Furth, a research fellow in macroeconomics in The Heritage Foundation’s Center for Data Analysis, sees the scores as a longer lasting demonstration of the difference between public and private services.

“It’s no surprise that the government is less consumer-friendly than private companies,” Furth said, adding:

In theory, people might expect the federal government to be more friendly and responsive because it belongs to us, the citizens. But in practice, public administration involves layer upon layer of bureaucracy, which by its nature is formulaic and slow to respond.

This isn’t a matter of needing improvements or better bureaucrats or modernization.  Public administration will always be more alienating than private enterprise.

The American Customer Satisfaction Index interviewed 2,079 consumers at random via email Nov. 12 to Dec. 12. The index then used what it calls a cause-and-effect econometric model to estimate consumer satisfaction.