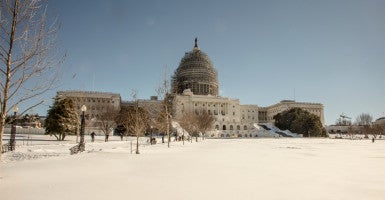 As Congress gears up to mount discussions on their fiscal books, a new report has found that Americans’ focus on deficits is waning.

However, the economic outlook for the next 10 years has budget experts saying that both the American people and their elected officials should turn their attention to government spending and federal deficits.

Though the public’s emphasis on reducing the deficit has tapered, a new report from the Congressional Budget Office painted a grim picture of the economic and budget landscapes over the next 10 years. According to the nonpartisan agency, government spending is projected to top $6.4 trillion in 2026, which serves as an increase of more than $2.7 trillion over a 10-year span.

Additionally, the CBO projected deficits will rise for the first time since 2009 and are projected to reach trillion-dollar levels by 2022. By 2026, meanwhile, the agency said deficits will approach $1.4 trillion.

“We’re just spending money to consumption and we’re paying for the sins of our past with interest on the debt,” Romina Boccia, deputy director of the Thomas A. Roe Institute for Economic Policy Studies at The Heritage Foundation, told The Daily Signal. “The more government borrows, it crowds out private-sector borrowing, which goes toward investment. … We are not putting resources now toward the productive use of growing our economy and creating a more prosperous future.”

“It’s important for the American people to recognize that it’s not government spending on foreign aid or just simply wasteful, mismanaged government that’s driving deeper and deeper us into debt. It’s the very popular programs that many Americans love and enjoy like Medicare, Medicaid, and Social Security, and we all need to work together to recognize what’s driving the growth in spending and debt and what is sucking the energy out of the economy,” Boccia said. She continued:

Politicians are followers. They will follow what their constituents demand. We need a change in culture. We need to change away from an entitlement culture to a culture of self-reliance where Americans demand from their public officials that they rein in spending on the entitlements, and that is the most difficult part.

Since 2009, when Obama took office, budget deficits have been cut in half—an accomplishment frequently touted by the president—and in the wake of the recession, Congress shifted its focus to cutting the deficit and decreasing spending.

Though policies such as the 2011 Budget Control Act and the sequester helped rein in the deficit, Boccia said, the issue has largely fallen off the public’s radar, and action from elected officials to deal with the growing deficit and spending has been limited.

“To the extent that Congress has not leveraged a debt limit, to the extent possible to rein in growing spending going forward, that’s a real leadership failure,” Boccia said. “But also the administration has been very willing to go along with debt limit suspension after debt limit suspension and hasn’t even made an attempt to balance its own budget. Congress hasn’t followed with its budget either. We have empty promises but no action, no legislative action to actually put reforms into action.”

Though Congress moved to curb spending and lessen the deficit in the wake of the recession, elected officials have done little to reform entitlements such as Social Security and Medicare. Budget experts, though, have warned that spending on those two programs will balloon as Baby Boomers retire.

“I think inaction of elected officials is still the most important piece when we look at budget projections,” Joshua Gordon, policy director at the Concord Coalition, told The Daily Signal. “We’ve known for quite some time that as the population ages and the Baby Boomer generation retires and begins to draw on social insurance programs, leaving less people in the workforce to tax to support those programs, you’re going to have increasing deficits.

“The fact that Congress and the president over the last 10 to 20 years have left this long-term challenge is really the number-one factor when we’re analyzing the size of CBO projections,” he continued.

The Committee for a Responsible Federal Budget analyzed the mentions of the deficit in the congressional record as compared to the size of the deficit, and found that policy makers discuss the issue more when the deficit is rising. As a result, there has been less focus on the deficit of late because deficits in 2015 were at their lowest level since before the recession.

“That’s a little bit discouraging, because it’s the opposite of when they should talk about the deficit,” Marc Goldwein, senior vice president at the Committee for a Responsible Federal Budget, told The Daily Signal. “What they really should be looking at is, when deficits are rising, a lot of the time it’s because the economy is doing poorly. Kennedy said, ‘The time to repair the roof is when the sun is shining[.]’ … It does give me some amount of encouragement that attention is going to rise on the issue because deficits are rising.”

Congress is gearing up to work on its 2017 budget resolution, and House Speaker Paul Ryan has stressed that his colleagues will work to pass 12 appropriations bills, which hasn’t been done in 20 years.

However, Gordon said it’s unlikely that efforts to reform entitlements and the tax code, or to cut deficits, will be mounted during budget discussions, as spending levels were set during the budget deal negotiated last year by President Obama and former House Speaker John Boehner, who retired last year.

Instead, Gordon said the focus is on the next administration.

“Most are anticipating a new president in 2017 and then a reset of the fiscal discussion based on who wins that election,” he said.

Still, Goldwein of the Committee for a Responsible Federal Budget said he hopes the report from the Congressional Budget Office serves as a red flag for policy makers and leads to meaningful reforms to help lower government spending and reduce deficits.

“What I’m fearful of, although it is better than nothing, is that the deficit goes up, and we respond to it the same as we did last time. We raise tax rates on the highest earners, cut defense spending, cut spending on education, research and development, infrastructure. It goes after the areas that aren’t the problem,” Goldwein said. “You say, ‘What’s the best way to reduce deficits while encouraging growth?’ It’s tax reform, entitlement reform. What I’m a fearful of is, we’ll end up with the wrong solutions again because they’re easy. But we can’t afford to do that again.”