Why Calling 2015 the Warmest Year on Record Is Problematic 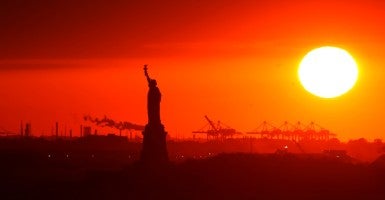 What is scary is how much faith some people put into model projections that do not comport with the observed temperature data. (Photo: iStockphoto / Marcio Silva)

As a third of Americans prepare to hunker down for a blizzard, the analysts at NASA has announced that 2015 was the hottest year on record (and this time they really mean it!).

While there is certainly a difference between the satellite data and surface data for temperature, this really doesn’t matter, because neither dataset supports the hysterical projections of the catastrophic warming crowd.

There is not a single thermometer that measures average annual world temperature. NASA’s warmest-year dataset takes measurements from thousands of sites around the world. However, these sites do not provide comprehensive coverage of surface temperatures, nor are the sites immune to contamination from land use changes—all of which add noise and uncertainty to the world temperature measurement.

Even the weather stations in the U.S., which probably has the best set of any country, have serious problems with data quality.

The keepers of this data employ a set of adjustments to address the many problems with it. However, such adjustments can induce biases into the data. One investigator found that even the very best data stations (which should need the least adjustment) showed an upward bias in the temperature trend after adjustment.

Even if the adjustments and the surface temperature data are spot-on, it doesn’t matter that much—none of the major data sets shows the accelerating warming of the Intergovernmental Panel on Climate Change projections.

They do not even show a constant warming. They show a significant moderation of the warming trend over the past two decades. Depending on the endpoints chosen, recent warming has been modest or even negative (slight cooling).

Perhaps it is not intuitive, but a flattening of the temperature trend is consistent with claims that “X” number of the “Y” hottest years have occurred since 2000.

As an analogy to why this is problematic, note that the last 45 years have been the tallest of my life—and I have been 50 percent taller than I was on average for the 17 years before that (but I have not grown an inch in those 45 years).

For climate, if you throw in natural variability (such as El Niño and La Niña) and measurement errors, the average temperature for some years will be higher than others even when the trend is flat.

Will the trend stay flat? Probably not. The Earth has been recovering from the Little Ice Age for a couple of centuries and recovering from a real ice age for thousands of years. So there is a reasonable chance that we will revert to an overall warming trend, but there is no guarantee. Who knows? We might even be headed into another ice age (as was predicted in the 1970s).

It should also be noted that human-caused CO2 emissions very likely add somewhat to average world temperature. However, regardless of what fraction of warming is due to anthropogenic CO2, the overall temperature trends are not scary.

What is scary is how much faith some people put into model projections that do not comport with the observed temperature data. Award-winning NASA scientists Dr. John Christy and Dr. Roy Spencer have shown that the Intergovernmental Panel on Climate Change models project warming that is twice as much as what has actually been observed (for both satellite and surface data).

Because virtually every news account of the warmest-year designation tries to link it to extreme weather, it should be noted that the National Oceanic and Atmospheric Administration and the Intergovernmental Panel on Climate Change show that there have been no upward trends in hurricanes, tornadoes, floods, or droughts.

So 2015 is the warmest year in a problematic dataset. It is one of the warmest in a much shorter, but arguably more reliable, dataset. But the important conclusion is that neither data set points to catastrophic warming.