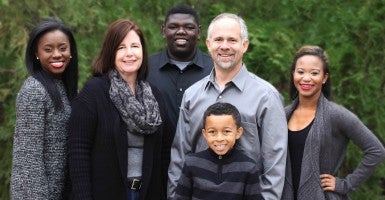 In college, Tim and Angela would counsel women facing an unplanned and unwanted pregnancy. And they always suggested adoption as an option. Some took their advice. Many didn’t.

Tim praises those who did, the mothers who gave up their children and “made one of the toughest and most loving choices there is.” When Tim and Angela started their own family, they opted to adopt—first one little girl, then three more children.

It’s not an unusual story. Thousands of American families adopt each year.

But it’s unique because today Tim Huelskamp splits his time between Kansas and Washington, D.C. And it’s remarkable because Huelskamp is a Republican member of the U.S. House of Representatives.

Like Huelskamp, some other members of Congress have opened their homes through adoption. They’ll tell you it’s a blessing but also admit it’s a challenge. And many consider it an opportunity to show a positive alternative to abortion.

“Life is incredibly precious,” Rep. David Schweikert, R-Ariz., says. “The only time I’ve cried in my adult life,” he tells The Daily Signal, is when he first held his adopted baby girl, Olivia. Rep. David Schweikert, R-Az, shows off the newest addition to his family.

“It’s a little backwards,” he admits, but after six years on a waiting list to become foster parents, he and his wife, Joyce, jumped at the opportunity to adopt a child.

That was last month. Since then, Schweikert has learned to juggle public policy while changing diapers, building cribs, and assembling strollers. But though he’s a new dad, he’s not new to adoption.

Abortion was still illegal in America when Schweikert’s biological mother, only miles away from the Mexican border, decided not to abort. The teenager turned her car around, choosing to skip the appointment she had in Tijuana.

Months later, in 1962, Schweikert was born in Los Angeles in a home for unwed mothers. Looking back, he says he’s “incredibly blessed.” And he thanks his birth mother for choosing not to end the pregnancy and instead giving him up for adoption.

As an adopted son who became an adoptive father, Schweikert doesn’t downplay the difficulty of an unplanned pregnancy. None of the lawmakers who spoke with The Daily Signal did. But Schweikert also notes that adoption has become easier “in the modern world.”

And now Schweikert is that dad, the one “with the photos” who’s always showing off his new kid, He also is telling everyone that “adoption’s not something to be scared of.”

Although there is no official count of how many members of Congress have chosen adoption, broad support exists for the institution on both sides of the aisle. The largest conference of lawmakers in Washington, the Congressional Adoption Caucus, has broad bipartisan support.

The mission of the caucus is “to work for every child to have a safe and loving family.” The group’s partner organization also sponsors an internship program that has placed more than 170 college students, once in foster care, in prestigious internships on Capitol Hill.

But while members offer their support, Rep. Markwayne Mullin, R-Okla., says many think their work in Congress would keep them from adopting kids.

At 42, Mullin didn’t want to adopt. He already had a young family of three. But his wife Christie kept pushing him about two little girls—twins separated at birth who needed a home.

“Quite frankly, I ran out of excuses,” Mullin says:

My wife was talking to me, talking to me, and trying to talk me into it. She finally said pray about it. How do you pray for something like that? That’s what opened the door.

When his family adopted and reunited the twins, Mullin’s hectic life became even busier. It’s been “the biggest blessing” but the biggest scheduling conflict, he says.

To make more time for the kids, the Oklahoma Republican often rolls into meetings and fundraisers with a posse. “Events have to be kid-friendly,” he explains, “or I don’t go.” And now, Mullin gets inundated with questions—not about policy or politics, but about his family’s experience.

“My wife and I are so amazed about how many people just want to talk about the adoption,” he says. And they’re ready to talk. The couple has met with lawmakers, staffers, even Capitol Hill police.

Mullin’s  advice is always the same:

If it’s crossed your mind, then there’s something that’s been put on your heart, then you need to actively pursue that. Until you know for a fact the door is closed. Otherwise that nagging is never going to go away.

But while the lawmakers who spoke to The Daily Signal all highlight the benefits of adoption, they’re quick to point out the cost. Rep. Kevin Brady, R-Texas, with his wife and two boys.

Adopting families easily can rack up tens of thousands of dollars in legal fees. While saving to adopt his second son, Rep. Kevin Brady, R-Texas, moved out of his D.C. apartment and slept on the couch in his office instead.

Now chairman of the tax-writing Ways and Means Committee, Brady says he worries that “adoption is just too expensive for working families.”

In the upcoming effort to overhaul the tax code, Brady says, he’ll be looking for ways to encourage the practice. Nothing’s official, but the tax wonk says his committee will consider an increase in the adoption tax credit.

But it’s when he sets aside spreadsheets and tax policy to talk about his two adopted boys that the big Texan chokes up.

“Adoption doesn’t just change your life,” he says. “It makes your life.”

When you have the opportunity to have a family, you can hardly wait till you can get home from Washington—to get in that front door and to see your children. To see your wife as a mother, that’s just remarkable.