What the Iranian Nuclear Implementation Day Means for US 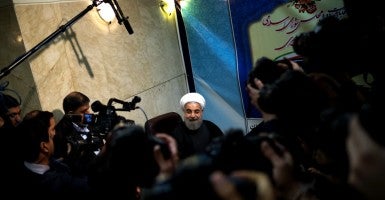 It’s been reported that “Implementation Day” is here, and nuclear sanctions against Iran have now been lifted. But what exactly does this mean?

1. What is Implementation Day?

Implementation Day is the point at which the deal agreed in Vienna last summer between the international community and Iran over the Iranian nuclear program comes into force. This means Iran will regain access to around $100 billion in unfrozen assets.

Iran will regain access to around $100 billion in unfrozen assets.

This is equivalent to almost one-third of Iran’s total GDP (if the U.S. were to receive one-third of its GDP overnight, it would amount to $5.6 trillion).

It’s important to keep in mind that these unfrozen assets do not include the hundreds of billions of dollars that Iran will receive over time as a result of international economic sanctions been lifted.

There is well-founded concern over what this Iranian financial windfall will mean.

While no one can know for sure what Iran will do with $100 billion in unfrozen assets, a quick look at its recent history can offer some ideas.

For instance, Iran is one of the largest state sponsors of terrorism in the world. It funds and supports insurgent groups, terrorist organizations, and proxy forces in Iraq, Yemen, Lebanon, Syria, and Afghanistan.

It has also encouraged political instability in places like Saudi Arabia and Bahrain. If Tehran’s recent actions in the Middle East are any indication, it is likely that a huge chunk of this money will go to supporting these nefarious groups. As if this wasn’t bad enough, Iran will likely use billions of dollars of sanctions relief to continue a covert nuclear weapons program. Essentially, the international community could very well end up funding Iran’s nuclear program.

2. Can the U.S. block the unfreezing of Iranian assets?

Of the $100 billion, an estimated $2 billion is located in the United States. Even if the U.S. took unilateral action and held on to this money (which it clearly won’t, because the Obama administration is the world’s biggest supporter of the deal), Iran will still enjoy an unprecedented financial windfall, similar to winning the Powerball lottery.

3. How do other countries view this?

It looks as though many of America’s partners and friends around the world are willing to go through with the deal.

There is a certain amount of diplomatic fatigue after years of negotiations, and many of America’s partners were only too happy to see a conclusion of this deal, no matter what the outcome. Many countries have also agreed to this deal blindly, with little or no public debate or parliamentary scrutiny.

This is particularly the case for many of our European partners such as the United Kingdom, Germany, and France, which were part of the official negotiating team but actually had little influence on the outcome.

So like it or not, Iran will have already received all of this money before the next U.S. presidential elections. No matter who gets elected, he or she will have to live with this reality.

5. Will this have a major impact on the geopolitics of the region?

Not only will Iran have a lot of money, but it will also have more confidence to act. In the eyes of the Iranians, the Vienna Agreement was a diplomatic triumph. There is a feeling in Tehran that the experience of the Vienna Agreement can be replicated to advance Iran’s interests in other regions of the world in what Iranian President Rouhani describes as a “third way” for Iranian foreign policy.

This newfound confidence, coupled with a massive injection of money, will prove to be a deadly combination for regional stability and security.

6. What can be done to stop this deal?

In a perfect world, the U.S. would’ve never agreed to this deal. In fact, one can easily surmise that the only reason why the deal was a agreed last summer was purely for President Barack Obama’s legacy.

My colleague at the Heritage Foundation and top Middle East expert Jim Phillips has written a great synopsis of what the next U.S. president can do.

The bottom line is that the next president should not accept the deal as a fait accompli.

Whether or not the next U.S. president will have the vision and leadership to roll back the deal remains to be seen. But failing to do so could have disastrous consequences, not only for the region, but for the world.

An Iran with a nuclear bomb will spark an arms race in one of the most unstable parts of the world.