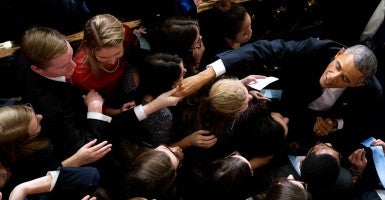 President Obama's audience for his final State of the Union will include quite a few local heroes. (Photo: The White House/Sipa USA/Newscom)

President Barack Obama will come before a joint session of Congress on Tuesday night to deliver his last State of the Union address. And it’s the hottest ticket in Washington.

Lawmakers, Supreme Court justices, and other government officials will pack the chamber of the House of Representatives to listen to the speech. In addition, dignitaries and honorees from around the country and the world will attend.

Traditionally, congressmen and senators receive one guest ticket to the event from the sergeant at arms of the House. Some invite friends, while others choose to highlight a praiseworthy constituent from their congressional district or state.

Here are 18 of the most interesting VIPs who will be in the audience for Obama’s final State of the Union address:

1 and 2. Dr. Ramy Kurdi and Sarah Hekmati, family members of a veteran imprisoned in Iran.

In a show of solidarity, Reps. Matt Salmon, R-Ariz., and Dan Kildee, D-Mich., invited the family of former Marine Amir Hekmati who is imprisoned in Iran.

Salmon’s guest is Kurdi, brother-in-law of the veteran, who was arrested on charges of spying for the CIA in Iran. Kildee’s guest is Hekmati’s sister, Sarah.

The two will be seated next to each other.

“It is very rare for two seats to be arranged near one another for a joint session address,” Salmon’s spokesman told The Daily Signal. “Representatives Salmon and Kildee wanted to show the bipartisan agreement of the House that bringing Amir home is of paramount importance in the new year.”

3. Robert Caret, chancellor of the University System of Maryland.

Aiming to promote college affordability, Sen. Ben Cardin, D-Md., invited Caret, the newly hired chancellor of the University System of Maryland. Caret, who began his job in July, is known as a leading spokesman on the issue of student debt. He represents more than 165,000 undergraduate and graduate students across 12 public campuses in Maryland.

“We need to be doing everything in our power to make education more affordable,” Cardin emailed The Daily Signal, adding:

I believe that the federal government should not be making a profit off student loans. By allowing students to drown in debt, we risk their future and we are shortchanging the future of our national and regional economies by pricing certain Americans out of the college market.

4. Cheryl Bennett, mother of a former Navy SEAL killed in the Benghazi attacks.

Rep. Mike Pompeo, R-Kan., will be accompanied by Bennett, mother of Tyrone Woods, one of the two former Navy SEALs who died during the terrorist attacks on U.S. facilities in Benghazi, Libya, on Sept. 11, 2012.

Pompeo is a member of the House Select Committee on Benghazi, which is investigating the terrorist attacks.

Piper went viral in a blog post earlier this year when he chastised college students for being too sensitive to other points of view.

In a letter on the school’s website, Piper told students: “This is not a daycare! This is a university.”

The letter came after students protested racial discrimination and other issues across college campuses in the U.S.

Piper is one of four Christian college presidents at the forefront of a Supreme Court case challenging the Obamacare contraception mandate, which requires employers to cover contraceptives and abortion drugs.

Rep. Mike Kelly, R-Pa., is bringing Digiacomo, who served 17 years in the Marines, including two tours in Iraq and one in Somalia.

Digiacomo works in Kelly’s office as coordinator of  veterans casework and outreach. Before that, he was a fellow with the Wounded Warrior Project.

7, 8, and 9. Deborah, Diana and Vincent Bonacasa, family of sergeant killed in Afghanistan.

Zeldin, who secured extra guest seats from House Speaker Paul Ryan, will be accompanied by Bonacasa’s widow, Deborah, and his parents, Diana and Vincent.

Bonacasa, an Air National Guard staff sergeant from Long Island, was one of six servicemen killed in a suicide attack on a patrol near Bagram Air Base in Afghanistan.

“It is the greatest honor to invite the family of Staff Sgt. Louis Bonacasa of Coram [N.Y.] as my guests for the 2016 State of the Union address,” Zeldin said in a press release. “Serving his final tour abroad, Bonacasa was a true American hero, and I cannot think of a greater way to honor his sacrifice to our nation.”

Rep. Debbie Wasserman Schultz, D-Fla., chairwoman of the Democratic National Committee, will bring Jaffer, a Muslim-American physician, as her guest. Jaffer has provided medical care to families and seniors in south Florida for nearly 30 years.

The invitation was meant to counter “hateful rhetoric” against Muslims, Wasserman Schultz said in a press release.

To call attention to how the nation treats drug abusers, Rep. Bill Foster, D-Ill., invited Ryan, 47, whose son, Nick, died at 20 of a heroin overdose in 2014.

According to the Chicago Tribune, the elder Ryan was also a heroin user. Clean for three years, Ryan is now Midwest outreach director for the Banyan Treatment Center.

He also founded A Man in Recovery, a nonprofit that seeks to bring people “from dope to hope” by securing them treatment.

“It’s a dream. I’m overwhelmed,” Kahin told MPR. “I always watched the State of the Union. It’s like the Super Bowl.”

Hoping to bring attention to gun-related crime and bloodshed, Rep. Carlos Curbelo, R-Fla., invited the leader of an advocacy group as his guest for the State of the Union.

Parks became head of Families Affected by Gun Violence after losing her 22-year-old son to gun violence in July 2014. She is a resident of Curbelo’s home district in Florida.

“She wants to serve as a voice for those who have died at the hands of these crimes, and prays for change in America so that children can live a normal, peaceful life,” Curbelo told The Daily Signal in an email.

Curbelo has been outspoken about confronting gun violence. While he opposed Obama’s recent decision to go around Congress with an executive action to extend background checks to more gun sales, Curbelo said he supports some of the president’s initiatives, including adding more FBI agents to process background checks.

Four years ago, MacFarlane’s father lost his life while serving in Afghanistan. As part of his Eagle Scout project, Conner organized a program to lay wreaths at the graves of fallen servicemen from Florida.

The organization has captured national headlines for protesting what they consider to be unjust police violence against blacks, often by disrupting public events.

Sen. Pat Toomey, R-Pa., will bring the 10-year veteran of the Pennsylvania State Police. Douglass was severely wounded and his partner killed when they were ambushed by a rifleman in 2014.

“It’s a once-in-a-lifetime opportunity,” the trooper said of the invitation. It’s an honor.”

Logan Barritt is the youngest VIP officially invited to the State of the Union. The Wisconsin preschool student raided his piggy bank to send Christmas presents to soldiers stationed overseas. His community responded by raising more than a thousand dollars for the effort.

House Speaker Paul Ryan, R-Wis., who invited him, says Logan shows that “kids can be heroes, too.”

Numerous other guests will watch Obama’s speech from Ryan’s box in the visitors’ gallery. In line with his push to fight poverty, Ryan invited several activists from his Wisconsin congressional district and around the country.

Also attending will be a representative from the Little Sisters of the Poor, a Catholic order of nuns. The nuns continue to fight before the Supreme Court for an exception to the Department of Health and Human Services’ Obamacare mandate that requires employers to cover abortion-inducing drugs in health plans.