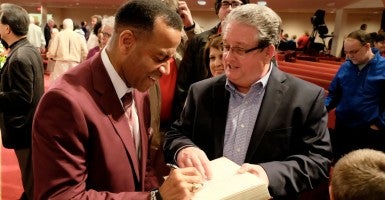 A federal judge on Wednesday gave former Atlanta Fire Chief Kelvin Cochran the OK to move forward with his case against the city and its mayor. (Photo: The Augusta Chronicle/ZUMA Press/Newscom)

A federal judge denied Wednesday the city of Atlanta’s attempt to throw out a wrongful termination case brought by former fire chief Kelvin Cochran. Cochran, who has served as a firefighter for 34 years, was fired after publishing and distributing a book that addressed issues of homosexuality, gay marriage, and premarital sex from a biblical perspective.

“The judge’s decision to allow the lawsuit to go on is extremely significant,” said Alliance Defending Freedom senior counsel David Cortman, who is representing Cochran in his case.

The city was looking to say there’s no validity to this case—we were just in firing him, and the court doesn’t even have to let the case go forward—and the court rightly rejected that and said no, there’s enough evidence here to move forward.

After being suspended without pay for 30 days, Cochran, an evangelical Christian, was fired from his job on Jan. 6. Less than a month later, he filed a federal lawsuit against the city of Atlanta and its mayor, Kasim Reed, arguing he was wrongfully terminated because of his Christian faith and beliefs.

Anne Torres, communications director for Reed, told The Daily Signal the case is “not about religious beliefs, nor is it about the First Amendment.”

“Rather, it is an employment matter involving an executive in charge of 1,129 firefighters and tasked to lead by example,” she said. “Instead of leadership, the former executive failed to follow his employer’s rules for outside employment.”

The city argued to drop the case before a U.S. District Court in Atlanta, but on Wednesday, Judge Leigh Martin May dismissed that request, greenlighting the majority of Cochran’s motions to move forward.

The city can file an appeal, but the case will now proceed to the discovery phase before May issues her final ruling.

Cochran began his employment as the fire chief of the Atlanta Fire and Rescue Department in 2008. In 2009, he was asked to serve under President Barack Obama as administrator of the U.S. Fire Administration in Washington, D.C. Ten months later, he returned to his position of fire chief of Atlanta until he was let go.

Cochran was fired shortly after City Councilman Alex Wan, who is openly gay, complained about passages from the book Cochran wrote primarily for a men’s Bible study.

The book, “Who Told You That You Were Naked?,” calls homosexuality “unclean” and sex outside marriage “the sex life of a naked man.” One passage reads:

Uncleanness—whatever is opposite of purity; including sodomy, homosexuality, lesbianism, pederasty, bestiality, all other forms of sexual perversion.

The complaint triggered an investigation into whether (1) Cochran had authorization to publish the book, (2) to what extent he distributed it in the office, and (3) whether his beliefs had led to any discrimination or adverse actions in the workplace.

The city concluded that Cochran did not seek the necessary approval to publish the book but noted that Cochran disputes the city’s account. Investigators also found that three government employees had received the book “unsolicited,” but Cochran maintains he had established relationships as believers in Christ.

No one interviewed could point to any instances of Cochran discriminating against an employee based on his religious beliefs.

“My profession for 34 years was to be willing to die for anyone under any condition where I could possibly save a life, and I am still committed to doing that today,” Cochran told The Daily Signal in an earlier interview. “There is no hatred. Love is the foundation of the Christian faith, and I have lived that out in my profession for 34 years.”

Cochran told The Daily Signal in an earlier interview that he believed his termination was forcing him to choose between keeping his job and living out his faith.

Torres, speaking on behalf of the mayor, said the city looks forward to presenting all relevant facts “and ultimately will prevail.”