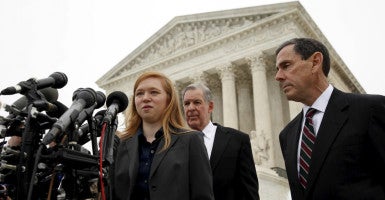 Abigail Fisher, the plaintiff in Fisher v. Texas, says she is a victim of racial discrimination regarding college admission. (Photo: Kevin Lamarque/Reuters/Newscom)

It was “déjà vu all over again” as Yogi Berra would have said, at the U.S. Supreme Court Wednesday, with protesters outside the court and race agitators like Al Sharpton leading the crowd, as the justices heard the case of Abigail Fisher for a second time.

Two years ago, the Supreme Court ruled in Fisher’s favor and sent her suit against the racial preferences at the University of Texas at Austin back down to the Fifth Circuit Court of Appeals.

Fisher, a white Texas resident, sued UT-Austin after she was denied admission, arguing that the school discriminated against her on the basis of her race. Last time around, the Supreme Court told UT-Austin that it must prove that its use of race in admissions is narrowly tailored to further a compelling state interest. Rather than hold the school to the strict standard mandated by the Supreme Court, the lower court essentially took the university at its word without further evidence, once again. Now back at the Supreme Court, Fisher argued that the school failed to produce evidence that its use of race can be squared with the Constitution.

Regrettably, the Supreme Court has long accepted the practice of state-run schools factoring race and ethnicity into their decisions about whether to admit students. But since its 2003 decision in Grutter v. Bollinger, the Court has required that before putting a thumb on the race scales, a school must pursue a “serious, good faith consideration of workable race-neutral alternatives that will achieve the diversity the university seeks.”

Although Texas’ Top 10 Percent law, which admits all students in the top ten percent of Texas high schools, boosted minority enrollment at UT-Austin, the school claims that it needs to consider the race of applicants for seats not filled by Top 10 Percent admittees in order to advance its interest in “qualitative diversity.” The university claimed that the Top 10 Percent plan admits “too many” minority students from majority-minority schools—apparently they don’t provide the “right” kind of diversity, according to UT-Austin admissions officials.

At the oral argument Wednesday, Bert Rein, the lawyer for Abigail Fisher, challenged that claim, saying there was no evidence that the Top Ten Percent law did not provide a sufficiently diverse, quality group of students for UT. He also argued that UT had not met its burden under both Grutter and the prior decision in Fisher of proving that the Top Ten percent program was not an adequate alternative to UT’s so-called “holistic review,” which takes race and ethnicity directly into account in the admissions program.

A majority of the Supreme Court justices have questioned the continued legitimacy of racial preferences, and the questioning Wednesday showed that a number of the justices remain skeptical.

Those Americans who view racial preferences as a fundamental violation of the Constitution and civil rights laws would no doubt have been disappointed by the fact that Rein did not challenge the use of race in all college admissions programs; he challenged only UT’s justification for this specific program. Rein made it clear at oral argument that he was not questioning the Supreme Court’s erroneous Grutter decision, which established “diversity” as a justification for racially discriminatory college admissions programs.

Greg Garre, a former deputy solicitor general during the George W. Bush administration and the attorney representing the university, and U.S. Solicitor General Donald Verrilli argued in favor of the legality of racially discriminatory admissions policies. Twelve years ago in Grutter, former Supreme Court Justice Sandra Day O’Connor famously said that she hoped that in 25 years, these racial preference programs would no longer be necessary. Garre and Verrilli were both asked by Justice Antonin Scalia and Chief Justice John Roberts about that 25-year statement, wanting to know how much longer these programs would be needed. Neither attorney had a good answer; in fact, their noncommittal answers made it clear that no university officials will ever think there is any reason to end such programs.

At one point, Garre made a statement that might upset quite a few Texans. In answer to a question, Garre said that the racially discriminatory admissions program at UT-Austin was needed because of the “persistence of segregation” in Texas schools. That was an odd statement, given that there have been no lawsuits filed by the Obama administration against Texas schools making such a claim, and there is no evidence in the record about “segregation” at Texas high schools, which would be illegal under federal law.

On several occasions, Garre seemed to be questioning the quality of the students admitted to UT-Austin through the Top Ten Percent law. This led to repeated questions from Justice Samuel Alito about whether Garre and the university were racially stereotyping those students or claiming that they had lower credentials than students admitted through the “holistic” review process. Garre tried to back away from that, but the essence of his argument was that the “holistic” review process is needed to get better students, a claim for which there is no evidence in the record.

What was missing in the claims being made by Garre on behalf of the university was any evidence of the benefits of the preference program. Garre kept talking about the educational benefit of diversity, but the key question about “educational benefit” would be whether “diversity” has led to better grades, higher graduation rates, and increased job placement for UT students. UT-Austin provided no evidence of that.

What also went unmentioned by either side was the fact that we now know that UT-Austin had a third, secret admissions policy that the university and its lawyers failed to inform the courts about. An outside investigation by Kroll, Inc. revealed that university officials regularly overrode the “holistic review” to allow politically connected individuals, such as state legislators and members of the university’s Board of Regents, to get family members and other friends admitted. Kroll found that many of these students were admitted “despite grades and test scores substantially below the median for admitted students.” This was a missed opportunity to highlight the seedy underbelly of college admissions.

There were only eight justices there Wednesday to question the lawyers. Justice Elena Kagan is recused in this case because she was solicitor general in 2010 when the Justice Department filed an amicus brief in the lower court.

A majority of the Supreme Court justices have questioned the continued legitimacy of racial preferences, and the questioning Wednesday showed that a number of the justices remain skeptical. Such preferences are nothing more than a euphemism for government-sanctioned discrimination, and they cannot be reconciled with the principle of equal protection embodied in the Fourteenth Amendment.

It is time for the Supreme Court to finally put that principle in place by completely banning racial preferences and other discriminatory practices in college admissions. Despite the failure of Fisher’s lawyer to ask for that, the Fisher case is a good opportunity for the justices to do so.