Why Turkey Shot Down a Russian Fighter Jet 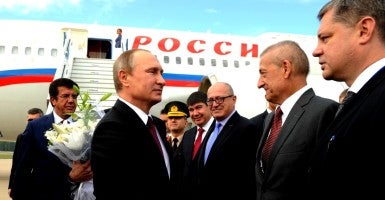 On Tuesday morning a Russian Su-24 warplane was shot down by Turkish F-16s after violating Turkish airspace. According to the latest media reports one Russian pilot was killed and another has been captured by local rebel forces on the ground.

To discuss what this means for NATO, the U.S., and the on-going conflict in Syria we asked the Heritage Foundation’s Margaret Thatcher Fellow Luke Coffey.

Q: Turkey is in NATO, so does this mean that NATO is at war with Russia?

A: Not at all, but it shows that Russia remains an on-going threat to the security of the NATO alliance. While NATO is holding an emergency meeting to discuss the incident, no side—including Russia—has been jumping to conclusions. Turkey claimed that they warned the Russian plane 10 times and all warnings were ignored. Russia disputes this claim. So far all sides are calling for calm and trying to ascertain the facts. Regardless, this incident shows how complex and dangerous the air campaign against ISIS has become since Russia started its intervention in Syria.

A: Yes. Russia regularly probes and illegally enters the airspace of other NATO members, especially the Baltic States and the United Kingdom. In terms of the history of the NATO alliance, it has been since the 1950’s that a NATO warplane has shot down a Russian fighter. Since Russia started its bombing campaign in Syria its warplanes have been accused of violating Turkey’s airspace on a number of occasions, but each airspace violation has had one thing in common: they have all occurred over Turkey’s Hatay province.

Q: What is so important about the Hatay province?

A: Syria has long disputed Turkey’s sovereignty over Hatay province, which borders Syria’s Latakia governorate, although the international community is in agreement that the region belongs to Turkey. In 2012 a Syrian fighter jet shot down a Turkish F-4 Phantom killing the pilot in the process over the region as well. Moscow knows that the Hatay province is a source of tension between Syria and Turkey–so flying Russian jets near the border serves as a useful way to keep local tensions high while testing Turkey, and by extension NATO’s air defenses.

In 2012 a Syrian fighter jet shot down a Turkish F-4 Phantom killing the pilot in the process over the region as well.

Q: What does Russia stand to gain by provoking Turkey?

A: Russia is more interested in keeping Syrian President Bashar al- Assad in power than he is fighting ISIS. Russia is engaged in a very dangerous game propping up Assad and is playing an even more dangerous game antagonizing Turkey. By probing Turkish airspace over Hatay, Russian President Vladimir Putin is doing Assad’s bidding. However, in this case it looks like Putin’s bullying has backfired and has cost the lives of at least one Russian pilot and capture of a second.

Q: What should NATO’s response be?

A: Turkey has a right to defend its air space when it is violated just like the U.S. or any other NATO member does. In this particular case, Turkey has been dealing with Russian and Syrian incursions for some time so Moscow should have realized that eventually Ankara was going to react. NATO needs to support Turkey’s right to self-defense and provide Turkey will any help it might require to secure its air space. This might include increased air patrols and the deployment of air surveillance capability. NATO needs to remain vigilant to a potential Russian retaliation, especially in regions like the Baltic States.