Anti-India Protests in Kathmandu Reflect Frustration With Blockade of Nepal 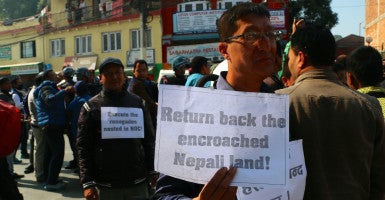 KATHMANDU, Nepal—Protesters here vented their frustration with India’s ongoing trade blockade of Nepal, which has created a nationwide fuel and medicine shortage and slowed the country’s economy to a standstill.

Hundreds of protesters filled Lazimpat Road on Friday, marching toward the Indian Embassy, shouting anti-Indian chants and carrying signs in both English and Hindi that admonished India for the blockade. India is Nepal’s No. 1 trading partner, but it restricted the flow of transport trucks after Nepal adopted a new constitution in September. Deadly protests erupted in Nepal’s southern Terai region following the constitution’s adoption, and more than 40 died in related violence.

India argues that Nepal’s new constitution needs to better represent its southern regions, which have close ethnic ties to India. Officials in Kathmandu and citizens across Nepal, meanwhile, accuse India of violating their country’s sovereignty. Nepal gets 60 percent of all imports and nearly all of its fuel from India. Consequently, wood is being used to cook food and heat homes throughout the country.

With winter setting in across the Himalayas, many remote villages without road access are in danger of not having enough fuel stockpiled before snow blocks routes accessible only by foot.

India’s unofficial trade blockade also has hampered Nepal’s ongoing efforts to rebuild after two massive earthquakes in 2015. Without fuel, international aid can’t be delivered to some of the most affected areas.

As evidenced by Friday’s protests, the trade dispute has sparked anti-Indian sentiment across Nepal. It has spurred many to demand closer ties with Beijing and to call for the reopening of northern trade routes into China across the Himalayas, which were damaged in the earthquakes.