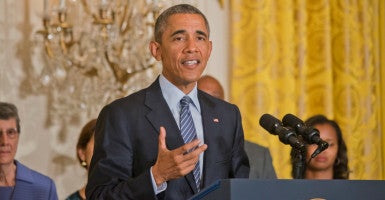 Some witnesses questioned the president’s climate initiative, the Clean Power Plan, during a House Committee on Science, Space and Technology hearing on Wednesday.

Anne Smith, the senior vice president and environmental practice co-chair at NERA Economic Consulting, cautioned that on the CPP, the “EPA’s cost estimate is an underestimate.”

Smith said the CPP’s “net costs to the economy are substantial,” with higher electricity costs and reduced consumer spending.

Paul Knappenberger, the assistant director of the Center for the Study of Science at the Cato Institute, said “climate change is real” and that it is due to “human and natural factors.” What is disputed is “the degree to which we can separate those factors.”

Knappenberger added that the Clean Power Plan would result in a “global temperature savings by the end of the century of about two one-hundredths of a degree.”

“This is neither meaningful nor scientifically detectable.”

Other witnesses were supportive of an international agreement.

Katie Dykes, the deputy commissioner of the Connecticut Department of Energy and Environmental Protection and the chair of the Regional Greenhouse Gas Initiative, Inc., defended the president’s initiative, comparing it to a climate agreement among states that she argued has created jobs and reduced carbon emissions.

“The Administration’s Empty Promises for the International Climate Treaty” hearing was held to examine the Obama administration’s climate agenda before the president participates in upcoming global climate talks.

President Barack Obama and other world leaders will meet at the United Nations Climate Change Conference, also referred to as COP 21, in Paris to negotiate a global climate change agreement. The conference takes place from Nov. 30 to Dec. 11.

The president announced his Clean Power Plan earlier this year, which he has said he hopes will lead the way to a global climate agreement.

“In December, with America leading the way, we have a chance to put in place one of the most ambitious international climate agreements in human history,” Obama said during a speech in August announcing the Clean Power Plan.

“My definition of leadership would be leading on climate change, an international accord that potentially we’ll get in Paris,” the president said during an interview with “60 Minutes” in October.