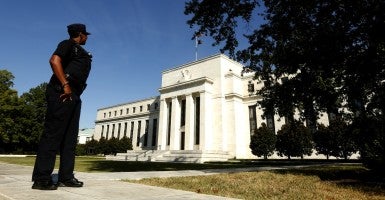 Proponents of monetary policy reform and financial deregulation have had very little to cheer about during the last few years.

Even many of the positive reform efforts in the U.S. House have been largely isolated to the Financial Services Committee, with little hope of even receiving a vote in the House, much less becoming law.

But now there’s an indication that the new House leadership is ready to support serious policy reforms: The House is scheduled to vote this week on the Fed Oversight Reform and Modernization Act of 2015 (the FORM Act).

Throughout its history, the Fed has operated within a purely discretionary policy framework. Rules-based monetary policy, on the other hand, gives a central bank a clear set of guidelines that credibly commit it to future policy actions.

Naturally, central banks will be hesitant to support this type of policy change because it limits their discretionary authority, but the FORM Act would allow the Fed to choose its own monetary policy rule. Furthermore, the new framework would give the Fed the flexibility to stop following its policy rule, provided that it explains its decision to Congress.

The Fed has a long history of lending to insolvent firms, and the best approach to fixing this problem would be to eliminate the Fed’s emergency lending authority.

The FORM Act doesn’t go this far, but it would implement restrictions aimed at making it more difficult to lend to insolvent firms at subsidy rates of interest, a major problem during the 2008 crisis.

Critics paint these policy audits as harassment of the Fed, but the GAO is an independent, nonpartisan congressional watchdog that regularly investigates federal agencies. Several former GAO officials have even pointed out that critics of “Audit the Fed” are maligning the GAO. No aspect of what the Federal Reserve does should be off limits to the GAO.

The commission’s recommendations would not bind Congress to implement any legislation, but it would provide Members of Congress with information they need to fulfill their constitutional responsibilities for monetary policy. Moreover, such a commission would provide a public venue for both critics and supporters to discuss the Fed’s past operations and the appropriate role for the central bank going forward.

The FORM Act includes several other policy ideas that would move U.S. monetary policy in the right direction, but U.S. financial markets need many more reforms.

For instance, Dodd-Frank imposed many harmful rules—such as the qualified mortgage (QM) standard—and the entire law should be repealed.

In the meantime, improve economic outcomes by eliminating the Fed’s broad discretionary powers and implementing the types of policies included in the FORM Act.

If House leadership is willing to engage in these types of monetary policy reforms, advocates of freeing financial markets from government intervention have a great deal to look forward to.