Paul Ryan on Boehner-Obama Budget Deal: ‘This Is Not the Way to Do the People’s Business’ 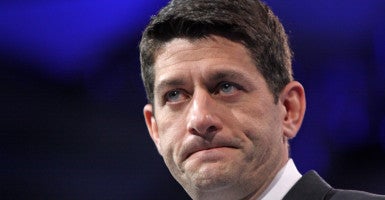 As Republican lawmakers met Monday to learn details of the budget plan, Ryan reportedly didn’t speak a word at the meeting. Politico reported that Ryan had not reviewed the contents of the deal as of Tuesday morning.

With a vote on the deal expected as early as Wednesday, conservatives turned their attention to the top candidate for speaker. Ryan will face an internal Republican conference vote Wednesday, then a public floor vote Thursday.

“We’re not just here to take commands,” Rep. Justin Amash, R-Mich., told CNN. “People back home expect us to participate in the process.”

“We would want [Ryan] to change the process, to make it more transparent, to let the committees do their work early, and to make sure that all members have the opportunity to weigh in early rather than find out when it’s too late,” Rep. John Fleming, R-La., told Roll Call.

The Obama-Boehner deal would increase the $18.1-trillion debt limit by at least $1.5 trillion and add $80 billion in spending above the budget caps agreed to in 2011.