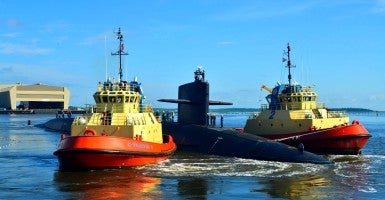 The United States is facing an increasingly constrained fiscal environment, with the 2011 Budget Control Act (BCA) placing mandatory limits on spending. At the same time, all three legs of the U.S. nuclear triad—land-based, sea-based, and airborne—are due for extensive modernization.

Further programs are needed to sustain the U.S. stockpile of nuclear warheads. These necessary programs—and the nuclear arsenal in general—have come under fire for being too expensive.

In reality, nuclear-related costs represent only a minor fraction of the total defense budget while providing an outsized benefit. Nuclear forces counter the only truly existential threat faced by the United States: the use of nuclear weapons against the U.S.

A large, modern nuclear arsenal is necessary to deter aggression by U.S. adversaries, including Russian and China, which both prioritize nuclear weapons in their national security strategies.

The report carefully calculates the nuclear-related costs of delivery systems, nuclear warheads, and command and control systems through fiscal year 2039.

It finds that while a so-called “bow wave” of increased spending on planned nuclear modernization will occur in the late 2020s and early 2030s, this spending will recede to current levels by the end of the 2030s.

Harrison notes that nuclear modernization spending represents a relatively insignificant portion of a much larger Department of Defense modernization bow wave. At no point is spending on nuclear forces projected to rise above five percent of the total defense budget, even if BCA caps on defense spending are extended indefinitely.

Notably, the report finds that only insignificant savings are to be had by reducing the size of the U.S. nuclear arsenal, largely due to fixed costs on necessary infrastructure, communications systems, and the like that must be incurred regardless of the arsenal’s size.

In Edelman’s words, the CSBA report “establishes that the issue of cost is not one that ought to be driving decisions, that decisions made about the future of the U.S. nuclear triad ought to be made on the basis of what senior officials conclude is the right nuclear strategy for the United states to have and not some prospective cost that is ‘unaffordable.’”

The current security environment requires the U.S. to have a strong nuclear deterrent. Russia and China pose serious nuclear threats and are undertaking extensive modernization programs.

The United States must modernize its own aging arsenal as well.

The CSBA report reveals that the programs required to do so are affordable, that they represent only a small portion of the defense budget, and that only marginal savings are to be had by eliminating them.

To watch the full event that took place at The Heritage Foundation, please click here.