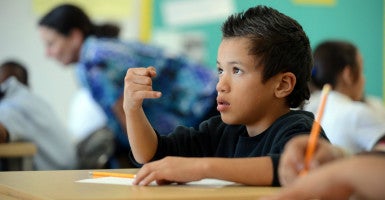 The New York Times has found that Common Core standardized tests are inconsistent because states use different labels to define the same scores. (Photo: Kristopher Skinner/MCT/Newscom)

The primary purpose of Common Core’s implementation throughout the U.S. was to create a standardized testing system across states to level education requirements, but The New York Times found that the new guidelines have done nothing to spur this anticipated consistency.

State officials in Ohio, for example, announced last month that two-thirds of students were proficient in reading and math, according to tests taken under Common Core standards. But in Illinois, despite students receiving similar scores, education officials said only about one-third were deemed proficient.

The discrepancy played out in Massachusetts as well, where about half of the students who took identical tests to those in Ohio were measured proficient.

The inconsistency was not because students were performing at vastly different levels among states, the Times reported, but was rather the result of states using different labels to define the same scores.

In California and North Carolina, for instance, state officials combined students who either passed or nearly passed the tests into the same category. In Florida, the Times continued, officials pushed for “less stringent” passing rates.

Initially, 46 states adopted the standards, but lawmakers in more than a dozen states have since moved to drop out of Common Core, while Indiana, Oklahoma, and South Carolina have repealed it fully.

The Times noted that fewer than half of the states that originally implemented the assessments are still using the same tests developed under Common Core, “making it difficult to equate results from different states.”

Lindsey Burke, a fellow in education policy at The Heritage Foundation, said that not only are states evaluating outcomes differently, but many are now deviating from Common Core standards to follow their own assessments.

“Proponents have long touted the ‘common’ in Common Core—that every child would be held to the same standard. But it appears the common is being lost as the real world implementation moves forward in some states,” Burke said.

This result, she continued, is the “folly” of believing that a single standard could be effective for all states and students.

“Now more than ever, states should exit the Common Core boondoggle and work to improve their own standards and assessments.”