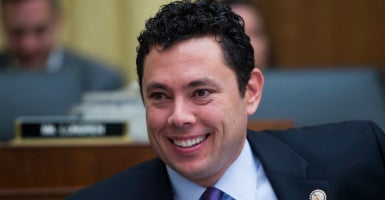 Rep. Jason Chaffetz announced his intention to run for House speaker during an interview Sunday on “Fox News Sunday.”

“Today, here, I am announcing my intention to run for speaker of the House of Representatives,” Chaffetz,R-Utah, said. “We were entrusted by the American people with the largest majority the Republicans have ever had since Babe Ruth was swinging the baseball bat.”

Host Chris Wallace pointed out that it is “widely assumed” that Majority Leader Kevin McCarthy, R-Calif., would become speaker after the current House speaker, John Boehner, announced his decision to leave Congress.

Chaffetz praised McCarthy as a “good man,” and as “a big reason why we have such a solid majority,” but said that “things have changed.”

“That’s why I’m offering myself as a candidate, to try to bridge that divide,” he added. “I think those 50-plus people find that I’m a fair, even-balanced person, that I can bridge that divide between our more centrist members and some of the more far-right-wing members. That’s why I’ve entered this race.”

“I think the American public wants to see a change. They want a fresh start…. You don’t just give an automatic promotion to the existing leadership team. That doesn’t signal change,” Chaffetz said.

Wallace also asked Chaffetz about his investigation into the Secret Service security breaches.

Chaffetz recently held a hearing regarding lapses in security at the White House. The Secret Service later leaked that Chaffetz had applied for a job with the agency several years ago and had been rejected.

“The Secret Service has demonstrated why we’ve started to investigate them and their shenanigans,” Chaffetz said.

In an interview with Politico, Chaffetz said that current House leadership has “missed opportunities” to send conservative bills to the president’s desk, adding that he is “tired of doing what the Senate wants to do.”

Chaffetz also expressed a preference for allowing committees to propose solutions to issues such as the debt ceiling.

“I’m not here to be a dictator but to empower members to do what they see fit. I want the process to work its way through the body,” Chaffetz told Politico.

Chaffetz is currently chairman of the House Oversight Committee.

In addition to Chaffetz and McCarthy, Rep. Daniel Webster, R-Fla., is also running for speaker.